After painting, new glass, re-chrome of the frames, and new gaskets, it was time to hang the driver and passenger side door. I discussed some aspects of the hanging the doors here. But recently, it became apparant that I was not going to be able to get the doors to latch properly with a reasonable closure force. One thing I discovered is slop in the door latch mechanism. We are talking about the mechanism that is mounted to the door. 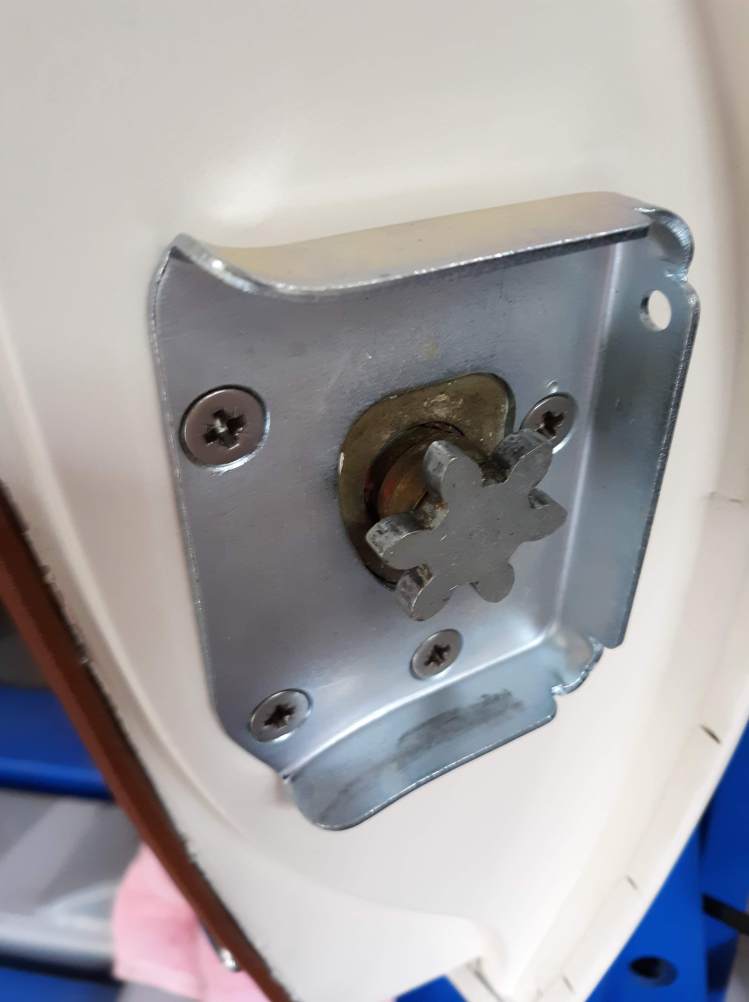 When you close the door there should be 2 clicks. After the first click, the door is loosely held closed but is not all the way closed. When you hear the second click and release the door, it should stay in its proper position. What I found when testing was that after either click, the door would pop back out a bit, maybe 1/4″ or so. This is enough to cause a commensurate mis-match between the surface of the door and that of the rear quarter panel. Now if you are so lucky that your door gaskets will compress an extra 1/4″, then you might be able to finesse this but as noted in the previous article, the new gaskets by default are very stiff. Ultimately, I had to remove the latch to make a repair. This of course involves taking off the handles, armrest, and door card. There are 4 screws that attach the latch, as seen in the above picture. Inside the door, you have to disconnect the arm from the interior release handle and maybe an arm to an external keylock (This is not true for all cars). If you pull the window frame vertically past the latch, then getting it out is very easy. You may be able to disconnect the frame at its bottom and rotate it enough to clear the latch.

Once I had the latch on the bench, the problem was apparant. There are star wheels on both the inside and the outside of the latch, connected by a common shaft. As I held one wheel firmly, I could rotate the other one by 20 or 30 degrees.

Inside of latch, showing interior star wheel held in by a phillips head screw.

On the latch shown above, when I removed the phillips head screw and washer, I found that the star wheel was mounted on the end of the shaft with 2 “flats” ground onto the shaft, with the star wheel having a mating pattern. On mine, the flats in the shaft had been wallowed out of the years, which allowed the slop.

How to fix it? Initially, I thought about using JB Weld or 2 part epoxy. I would not rule this approach out but I have two concerns. Will this material be strong enough for the task? And if any oozes down into the latch, it could lock it up from turning. Instead I I used my MIG welder to add material to the shaft, when I then ground back to match the opening in the star wheel. I did apply some blue Locktite to the threads of the phillips head screw. This screw should not be overly tightened, since if it is too tight, the assembly will not rotate freely. So the Locktite should hold the screw in the correct position.

I put everything back together and was rewarded with a door that now closes correctly with good panel alignment.

I will note that I subsequently took off the passenger side latch to make the same repair. It did not have a phillips head screw, rather it just had sort of a smashed end on the shaft that gripped the star wheel. More commensurate with a mass production piece. I’m not sure which one is original. This one could not be easily taken apart so I just laid in a couple of spot welds with the MIG to firm everything up.

I hope you’ll find this article helpful. I spent several days aligning and fitting each door. Another example of Etype rabbit holes that we go down during the restoration process.