In my article here, I discussed removing various items of sheetmetal I found in the car that were not repaired to the original factory configuration. Mainly affected were the footwells, the firewall, and the rear of the driver’s side sill. After removing the offending pieces, I had the body shell media blasted. A fortunate outcome of the media blasting effort was that I did not find any rust areas. Amazing but I guess the previous body mechanic did find and excise any rusty areas. Along these lines, I did come to suspect that the outer sill panel on the drivers side had been replaced. This was mainly based on the “blob welding” that I found along the lower edge of the sill, instead of the correct spot welding. Now it was time to begin reconstruction of the removed panels. 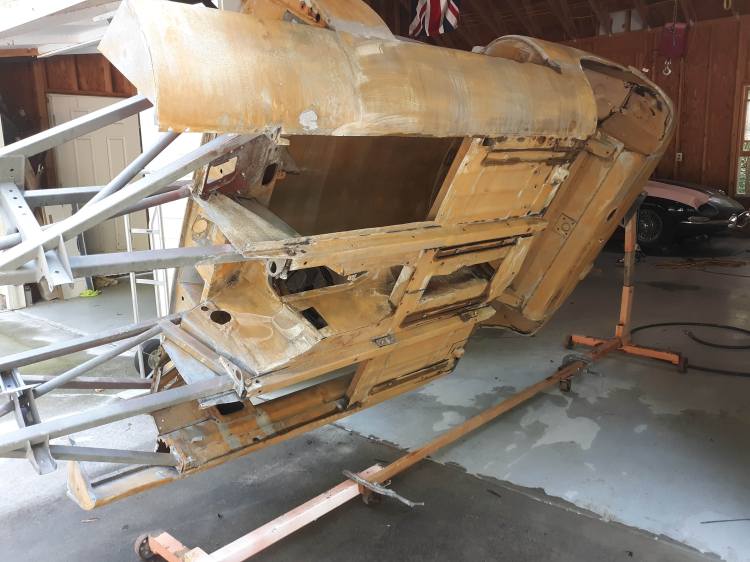 Footwells and portions of firewall removed.

During the original construction of the car, the die stamped footwells had a 3/4″ flange around their 4 sides. An opening was cut into the floor pan element which the footwells were laid into and spot welded. Spot welding must be ammenable to mass production because there are a ton of them in an Etype tub. A spot welder applies an electric current through two pieces of overlapping sheet metal. Locally, the two metal surfaces get very hot and fuse together. A spot of weld is created. A spot welder is basically a large transformer, with articulating tongs. The tongs are lightly clamped on either side of the joint, the welder is switched on for a moment, and the weld is made. Easy peasy when set up correctly. Here is an image of a spot welder that I purchased. 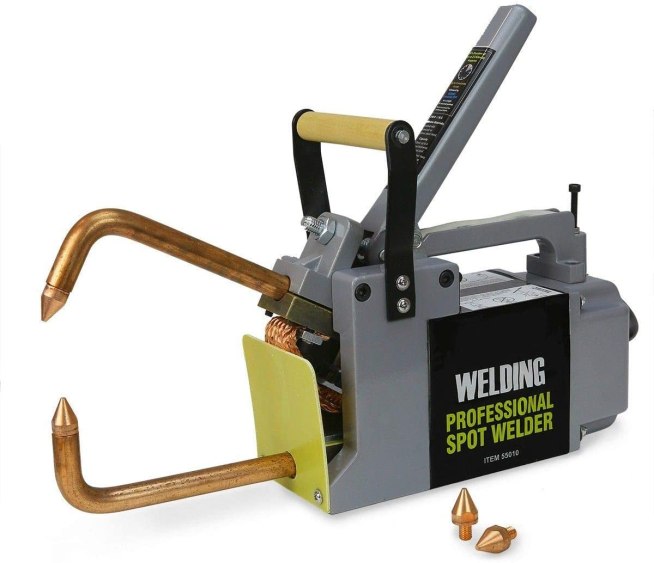 There are several brands on the market, in the $150 to $200 price range. As far as I can tell, they are all from the same manufacturer. On this one, the distance from the yellow plate to the tips of the tongs is about 6″. This severely limits access. Industrial versions must be quite large, in order to reach places like the footwell seam, which would require a 30″ opening in the tongs. I got one, thinking I could at least use it on the firewall.

Another option is to “fake” a spotweld. You are basically making a plug weld. One of the 2 overlapping pieces has a hole cut in it, roughly 1/4″ diameter. One uses their MIG or TIG rig to fill in the hole with weld. From the welded side it looks like a plug weld but on the back side, it looks a lot like a spot weld. And it has similar, if not superior strength, to a spot weld. I see that Monocouque Metalworks uses this technique for their footwell repairs. It is an entirely valid way to obtain a process and look similar to original construction, at a fraction of the expense in equipment.

Initially I was going to go this route. But I quickly found out that the prior body mechanic had cut his openings in the floors bigger than the my floorpans, such that the panels would not overlap sufficiently to make plug welds. What to do?

Well, meet my new best friend. Modern automotive adhesive bonding. If you watch any of the various documentaries on Youtube about modern automotive construction, you will certainly see robots doing welding but you will also see copious use of adhesive bonding materials. It is basically a two part epoxy but epoxy on steroids. I purchased 3M Panel Bonding Adhesive. I also bought the gun that extrudes and mixes the two chemical components.

3M Panel Bonding Adhesive cartridge, loaded in the extrusion/mixing gun. You can’t see it from this angle but there are 2 separate tubes of chemicals, which are mixed in the nozzle. It comes out about the consistancy of toothpaste. In this picture, I have just laid a bead on the perimeter sealing surface of the footwell.

Application couldn’t be easier. You apply a bead of material to each part to the joined. You lay them into position and lightly clamp them. The material reaches full strength in 24 hours. The material dries to a rock hard consistancy. I’m quite sure the bond strength is superior to spot welding. An added benefit is that the entire joint is rendered waterproof and corrosion proofed. One problem with spot welding is that the two metal surfaces must be electrically conductive. This means you can’t put primers or sealants at the areas to be spot welded. This introduces a situation where future corrosion may develop, although seam sealers are tradtionally used to isolate the joint edges from the elements after spot welding. The installation of the footwells went off without a hitch. For what it’s worth, if anyone were to examine the footwell from the top side, they would still see the spot welds, as I cut it from a larger floor piece that I bought from SNG. This bottom side would be a give away, as their are no spot welds there.

Before I get ahead of myself, the area along the outside edge of the drivers side footwell exhibited a series of drilled out holes. These were clearly the result of the previous body mechanic removing the existing spot welds to release the sill plate. As I have noted, they did not fill these holes with weld, rather they made a blob weld along the outside. I took this oportunity to weld up most of these holes as plug welds and thus secure the sill per original construction. This all got covered up when I used the adhesive to make a lap joint when installing the footwell.

In the lower edge of this picture, you can see a bunch of holes from drilled out spot welds. I filled most of these holes with plug welds.

I moved on to the firewall pieces (already installed in the above picture). Before closing off the ends of the sills, I filled the inside volume of the sills with an aerosol “cavity wax”, to hopefully render them more corrosion resistant. In the case of the firewall pieces, they are flanged to create easily accesible surfaces for spot welding. I bought the el-cheapo spotwelder with the intent of doing spot welds for these pieces, where accessible with the 6″ tongs. I started by practicing spot welds on some 1/16″ material I had on hand. It worked well enough, although one had to be careful on the trigger switch, as there is no amperage adjustment available. I tried separately to spot weld some pieces that had been etch primed. No go. No conductively, no weld. I did not try “weld through primer” but I have my suspicions that it would fare no better.

So I spent a lot of time making sure that the firewell pieces fit together reasonably well. Nothing fits perfectly on an Etype, it seems! A little beating, a little snipping, and a lot of clamps and I was ready. First spot weld. Spitz. A nice hole! Second spot weld. Spitz. Another hole. Being really quick on the trigger, I managed to avoid a hole but at this point, I was also able to separate the still fresh weld. Damn! In retrospect, it seems that the modest material thickness, around 0.040″ of the Jaguar materials was just not within the range of this one size fits all spot welder. It was at this moment I decided screw it, I’m going the adhesive route.

I actually used a lot more clamps than this but I forgot to take a picture!

And so I did. Again, it was very straightforward. Put the adhesive everywhere you want joined. You can’t see it in this picture but there are surfaces behind the new pieces that would have to be plug welded but it was easy with the adhesive. Note that you will get adhesive where you don’t want it. It cleans up quite easily with lacquer thinner.

So I’m a convert. I could have burned a lot of holes in precious sheet metal. Instead I have extremely robust joints. I just hope I never have to take them apart!!!

One final note. I spent some time making sure, using my digital levels, that the tub was not “warped”. I mounted the tub on my shop cart and shimmed it to be level at the rear and at the front. This is important since the firewall panels are “shear panels” that help control the torsional strength of the tub. With this adhesive, it had better be right from the git go. 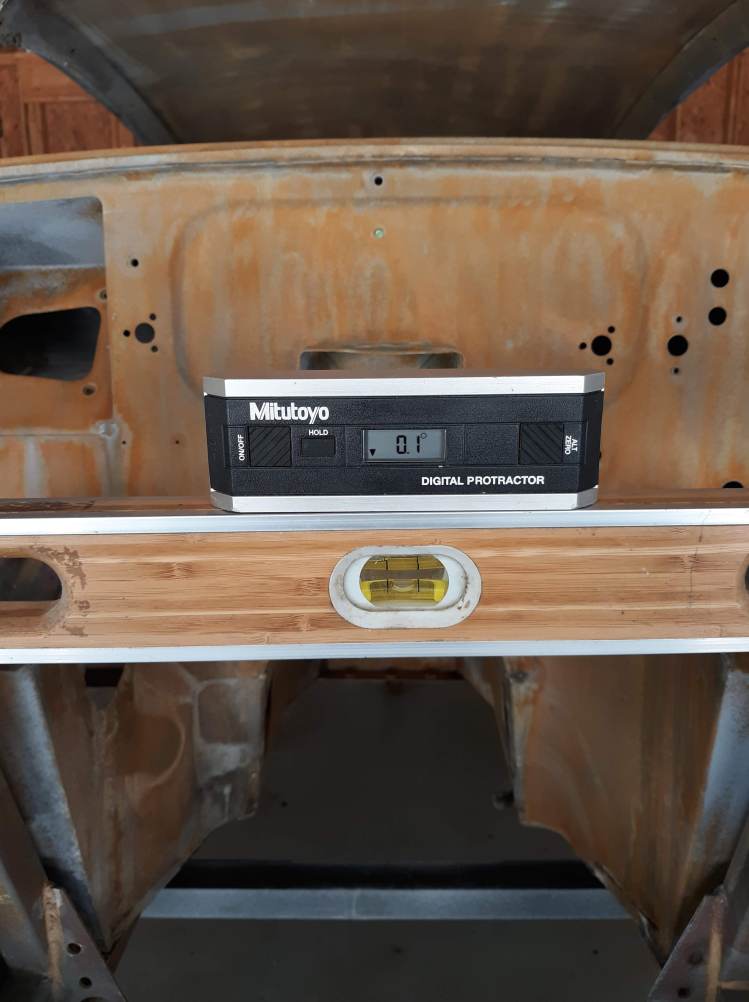 The only thing left is the panel at the rear of the sill. I cleaned up all the existing surfaces, did some trimming on the repair piece (which was slightly too big), coated all the applicable surfaces with adhesive, and installed the panel. Not obvious when looking at the completed installation is that there are multiple surfaces on the back side and around the curved edge that would have to be in perfect contact (from an electrical conduction standpoint) to make a spot weld and pretty close (within 1/16″) to make a plug weld. Although the replacement panel fit pretty well, I would have had to do some serious work to meet that standard. Indeed the previous body mechanic had resorted to welding little metal rods along the curved edge that he trimmed to meet his replacement panel. The consequence was that he left some pretty serious gaps, hidden by the curved flanged edge of the wheel opening but there all the same.

I will make one caveat. I have read the Tech Sheets for the 3M Adhesive. It has an optimum bond gap between the two joined surfaces and it is a small number, 250 micrometers if I read the data sheet correctly. Their shear strength data is reported at those optimum gap values. I’m sure as your gaps grow larger, the shear strength drops off. So one can’t go wild with sloppy fits between panels. But on the flip side, the shear strength of a spot weld may be high but the actual net shear area of a line of spot welds spaced every 2 inches or so is not a very large number, whereas the adhesive is applied over the entire overlap area, a much larger value. We’re not going to be putting these pieces in some sort of test rig and loading them to failure but I suspect the adhesive would do quite well vis a vis standard spot welds. Indeed, back when stock cars were routinely converted to race cars, it was common practice to weld many of the critical spot welded seams continously, since the spot welds could not be counted on to hold up to the rigours of racing. Anyway, as an engineer, I am quite comfortable that the joints on my adhesively bonded panels will be the last part of the car left after the rest has turned into a pile of rust!

I wanted to get the firewall done, before I put it back on the rotisserie. Onward to more paint prep. Fun stuff!