A phrase you will hear bandied about at classic car auctions and web sites is “matching numbers”. In it’s simplest terms, this means that the identification numbers of the car’s key components match the ones it was “born” with. Collectors of “original” or “unrestored” cars place a lot of stock in Matching Numbers to help them know that the components of the car are indeed original. Of course, cars can be extensively restored and still have Matching Numbers. On the more nefarious side of things, copies or clones of significant cars can be generated. Going through the exercise to determine if a car has Matching Numbers can help identify these situations, although if the bad guys are good, they will fake the Matching Numbers part of things too. That said, all cars have a VIN (vehicle identification number) although they may go by different terms based on country of origin and when the car was built. On an Etype, and really all old Jaguars, the equivalent term is the Car Number, at least that is the term used on the Data Plate for my 1963 and 1967 Etypes. In some states, such as California, the VIN number had to be a certain minimum number of characters and the Car Number was appended with additional characters to make it agree. Here in North Carolina, my title for the 63 FHC lists the VIN number as J63888055, which is basically a J for Jaguar, 63 for the title year, and the remaining characters are the 6 digit Car Number. But all of that is about the identifying number for the car as used on the Title. It had better match or you’ve got legal problems to deal with. What is of interest to collectors and enthusiats are the other numbers associated with the car. The Data Plate on my 63 FHC lists a Car Number, Engine Number, Body Number, and Gearbox Number. So if every number for those items matches what is actually in the car, you have a “Matching Numbers” car. My car is a partially Matching Numbers car but we will get to that in a minute.

The Data Plate on an Etype is mounted on the passenger side of the engine compartment and, as noted above, it stamped with the Jaguar numbers for the Car, Engine, Body, and Gearbox. This would seem pretty solid but Data Plates can be forged. If you want a fairly ironclad confirmation, you can apply for a Heritage Certificate from the Jaguar Daimler Heritage Trust. They maintain the original records for the cars Jaguar built. For a fee, they will research their records and confirm the information on your Data Plate. The Heritage Certificate also lists the original exterior and interior colors, the build date, and if available, the name of the first owner. Other marques have similar but different variations on this theme.

The book I have mentioned previously, Jaguar E-Type Six Cylinder Originality Guide, does a good job of explaining where the various numbers can be found on your car. It is rather complicated so I won’t go into that here. But here is what I found for the 63 FHC. My Car Number is 888055. It is listed on the Data Plate and is stamped on the top of the “picture frame”, a part of the engine and suspension support structure.

The Engine Number, R9655-9, can be found in two places. It is stamped on the cylinder head and on the block, right above the oil filter. 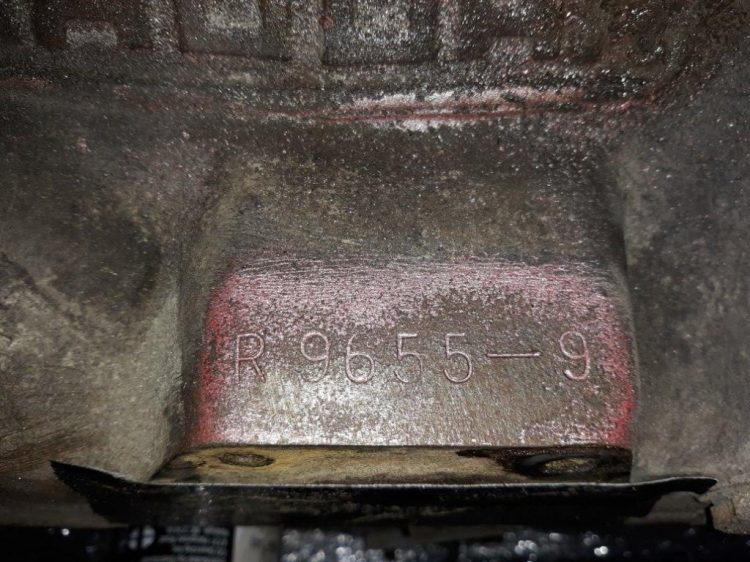 Of secondary interest is the Engine Block Number. This is a more generic number for the series of block casting used. 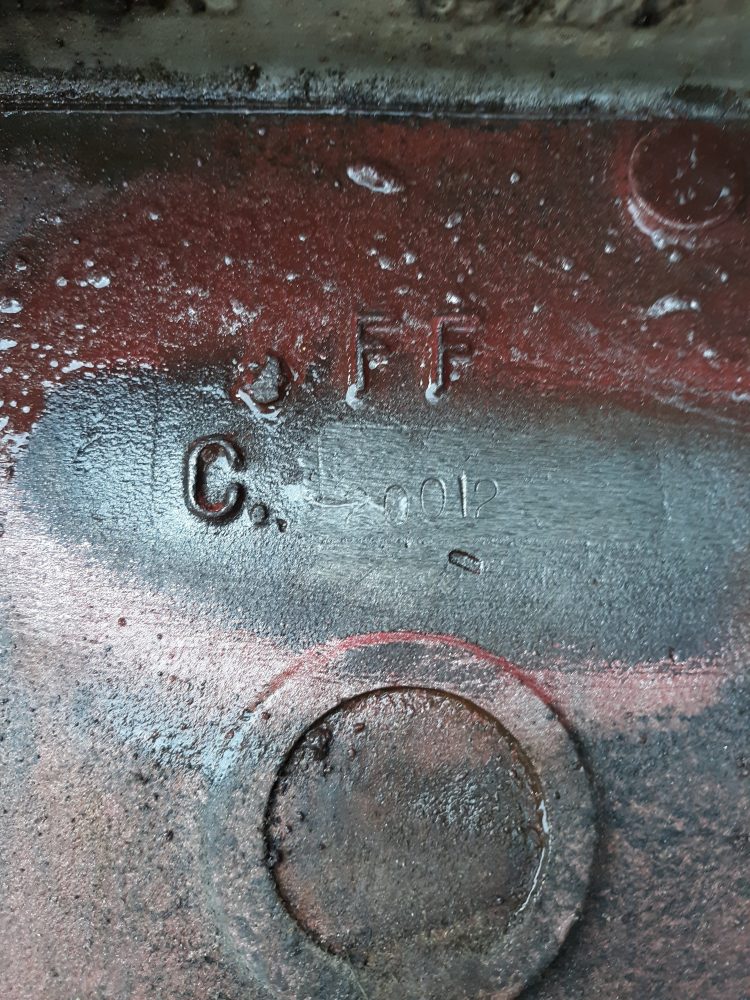 That’s it for the matching numbers part of my car. The next thing I looked at was the Body Number. On this car, it is a small plate riveted to the inside surface of the driver’s side rear fender well. On a finished car, it is covered up by glued on upholstery but in my case, it was there to see, albeit faded. It’s hard to read but I’ll help you out. It says V5139. Not the number on my Data Plate. I contacted Jaguar Heritage Trust about this issue. They stood behind the number on my build record, V4955. They did allow that V5139 belonged to a 3.8 FHC manufactured on February 15th of 1963, approximately 44 days after my car was built. So you can certainly say that my body is “period correct”, as they say. Since I received the body on a dolly and the rest of the car in boxes, I guess it is safe to say that there was something major wrong with the original body (terminal rust, bad accident?) such that they sourced another body in good condition from the firewall back (a front end collision, blown engine?) and decided to marry the two. Except they never got around to the marry part! If anyone reading this knows the rest of the story, please get in touch with me!

One of my followers, Tony, sent me an email. He pointed out that if you look closely in the above photo, above the metal body tag, you can see faintly in blue the numbers 4955. I went out to look at the car again and I can make it out, very faintly. I have no idea what this means, especially in light of the note from Jaguar Heritage Trust below. Could have been a switcheroo at the factory that got lost in the paperwork or could have been someone at a bodyshop years later having some fun. I’ll probably never know! 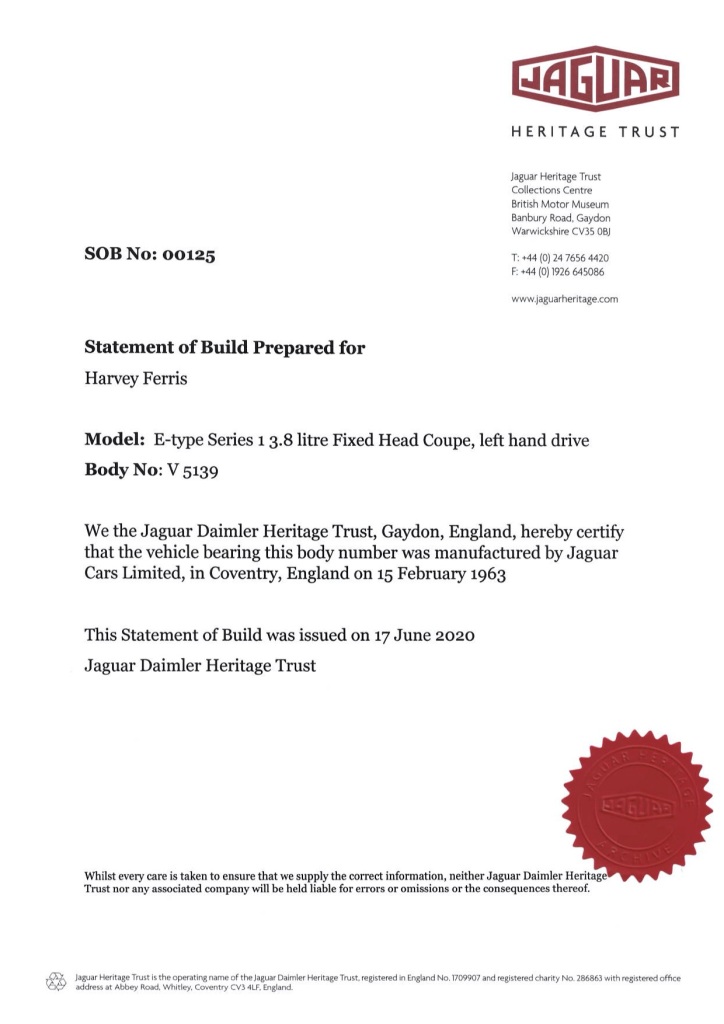 Letter from Jaguar Heritage Trust regarding the body.

Finally, there is the Gearbox Number. This one doesn’t match for an obvious reason. The transmission I received with my pile of parts is the more modern fully syncromesh transmission that Jaguar started installing in Etypes in 1964. The transmission original to the car would have been the infamous Moss gearbox. This gearbox was used by Jaguar for many years. It lacks syncros in first gear. Shifting a Mossbox can be an “acquired taste” but many of the early cars have been updated to the later gearbox for ease of driving. The number on the transmission that will be installed in this car is KE 13117. Based on a little internet sluething, this transmission would appear to be a Standard Ratio transmission from a Series II car. I have sent it to Dick Maury at Conventry West for detailed inspection and any necessary repairs.

That’s it for the Matching Numbers situation on my car. Always an interesting journey.

December 31, 2020 Edit: I found this comment on BringATrailer, when discussing the sale of an Etype OTS manufactured in 1961. I have no idea of the veracity but it sounds reasonable.

KKR. The mismatching BODY No is the rule, rather than the exception with early 3.8 E-types. I discussed this at length 15-20 yeras ago with the factory JDHT when they asked me why…. Its based on the fact that with a E-type having a Body No as well as a CAR No is an unnecessary duplication, so production line control and sequencing was based on CAR No, and if next build in sequence was scheduled to be a particular colour body shell, then the suitably painted OTS or FHC body shell was simply picked from the storage racks of just painted bodies, so no concern whether BODY No actually matched the build schedule. Thats as simple as I can keep it in a few words, but reality is that BODY Nos are typically +/- 50 numbers mismatch. Your photos are just another example. Trouble is JDHT only records the BODY No stamped into the ID Plate on their records, so the actual/real Body No is not recorded…

January 29, 2021 Edit: At the risk of sounding defensive about the situation with my body number tag, here is another post I ran across on Jag-Lovers. Reposted here with the permission of the author, Ian Jackson of Canberra, Austrailia.