So it’s happened.  I’ve slid down the slippery slope of multiple track car ownership.  It started out innocently enough.  I scan the Craigslist ads every week for Jaguar, Lotus, Ferrari, and Porsche.  I’m not sure why but you just never know what might turn up.  Well, as far as Ferrari’s and Lotus, next to nothing ever turns up.  And I only look at the By Owner ads, as the dealer ads make me crazy with all the hype.  There are usually 2 or 3 944’s listed for sale every week. I had decided that I wanted to get a spare engine for the orange track car.  My most recent approach of buying a used engine from DC Auto resulted in me paying $1500 for something that needed to be completely rebuilt to ensure reliability.  So I thought I would just buy a complete car this time.  One Wednesday night while out of town on business I saw an ad for a 1984 944 that looked promising.  I.e. cheap but running.  I dashed down to Rock Hill from the Charlotte airport on my way home.  The car had needs but the engine fired up and sounded good enough.  Plus it sported a set of Fuchs and sport seats.  When offered $1000 the owner said “Deal”.  I returned the following week with my truck and trailer and hauled it home to the NewHillGarage.

Did I say it was rough?  It is really painful to see how far some of these cars sink.  I put it on the lift and proceeded to drop the entire drivetrain.  I think this is the reverse of what they do at the factory but it was the first time I had tried this.  It went pretty well I guess, although there are a lot of brackets and stuff in the torque tube tunnel that have to be got rid of before it will come out.

The first order of business was do a more thorough inspection of the engine.  I checked the compression and found 180 psi give or take on all cylinders.  So I proceeded to tear the engine down to a bare block.  There were no surprises during dis-assembly.  I removed the valves and bead blasted the head.  I took the head and the crank to T-Hoff in Raleigh to have new valve guides installed, get the valves ground, and get the crank inspected and polished.

At some point, I decided that maybe rather than just stripping the car for parts, I might like to make it street legal track car.  There would be several advantages.  I would have a backup car to my orange track car.  With Karma being the way it is, if I have a backup I’ll never need it 🙂  I also wanted to be able to take 2 of my kids to the track with me at the same time.  And I wanted a “test mule” to actually break in the rebuilt engine and maybe check out some other ideas I have.  So at some point I put together a quick budget and figured that for about $5000 I could have a track ready car that was also street legal.  We’ll see how that works out in future articles. 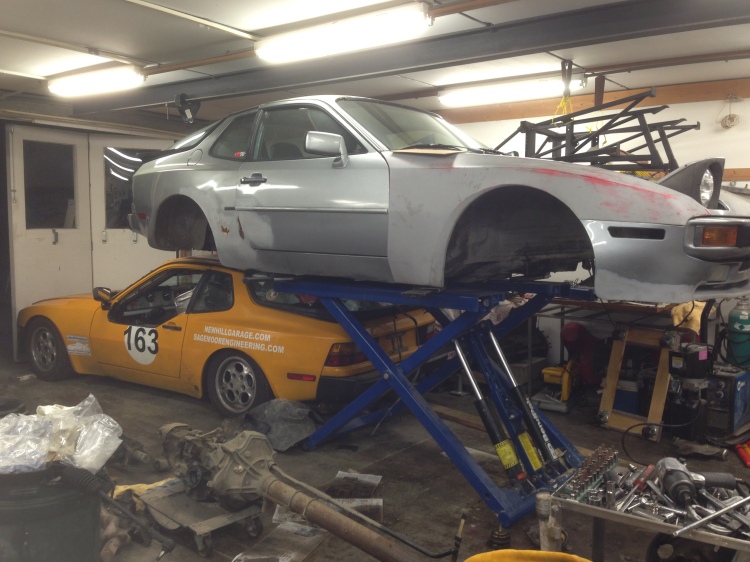