My last post commented on getting the painting completed, which was a really big deal. Now my progress is a little more scattershot, as is required to keep moving forward as obstacles come up.

Wiring – As I have mentioned earlier, I purchased a full set of wiring harnesses from Rhode Island Wiring. During my previous restoration, I had made up wiring harnesses from scratch. Not this time! The most intensive part of the wiring harness installation takes place in the dash area. With the windshield removed and a clear firewall (no engine frames yet) it was about the best case scenario for working on the wiring in the dash, as I could stand right over the work location. Certainly preferable to having to work solely from inside the car! Rhode Island Wiring has very nice diagrams that come with their harnesses. That said, they are diagrams, not step by step How To documents. Thank God I have my second 1967 Etype 2+2 just feet away over in the corner of the shop. When I need to see how something was routed, I just walk over to the other car. Cheating? Heck yes but I’m happy to be able to do so.

There are 2 major harnesses in the dash. Both exit into the engine compartment from behind the voltage regulator. Other harnesses connect as required to feed the rear lights, fuel pump, fuel tank level sender, interior lights, etc. At this point, all the harnesses that reside inside the cockpit are installed and the ones that lead into the engine compartment are also installed but not routed yet. I am very impressed and pleased with the workmanship of the Rhode Island Wiring harnesses. 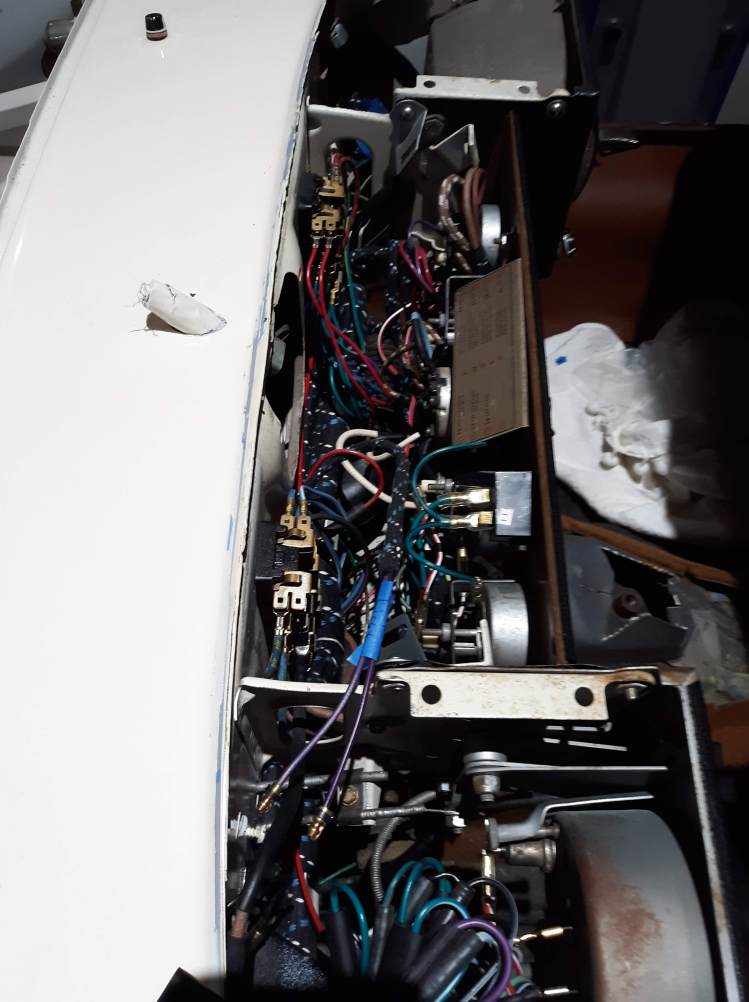 Engine Frames – one of the first things I wanted to do after painting was to attach the engine frames to the firewall. I haven’t talked much about the engine frames. If you were to refer back to the article here, you would see that the engine frames that were on the car when I got it had some pin hole corrosion on the bottom surface of the lowest frame members i.e. where all the water settles out to. I made a repair using brazed plates. After almost 10 years of use, this repair seems to be holding up fine. But upon inspection I identified a cracked weld at one of the joints. This is a bigger deal. Fortunately, a few years ago I purchased a set of aftermarket frames manufactured by E Type Fabs in the UK. I decided it was time to put them into service. I bead blasted them back to bare metal to allow a close inspection for condition and to start the painting process. The brazing work on these frames is beautiful. It’s a shame to have to paint them. 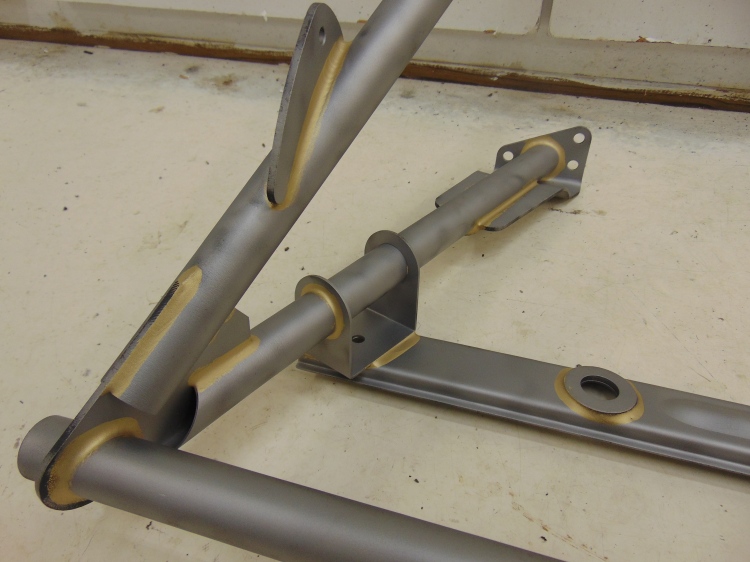 Based on the recommendation of my Axalta rep, I treated them with a two step wash that removes any trace amounts of corrosion and then applies an anticorrosion coating. Next I applied a coat of epoxy primer and then I applied the same basecoat/clearcoat as applied to the rest of the car. The “picture frame” and the bonnet support frame were in good condition. They received the same treatments and paint. Originality tip: According to my Haddock book, it appears that originally the frames were painted separately from car, upside down, and that the paint typically had runs in it. Now I can reproduce paint runs with the best of them so my frames do look very original in that regard! 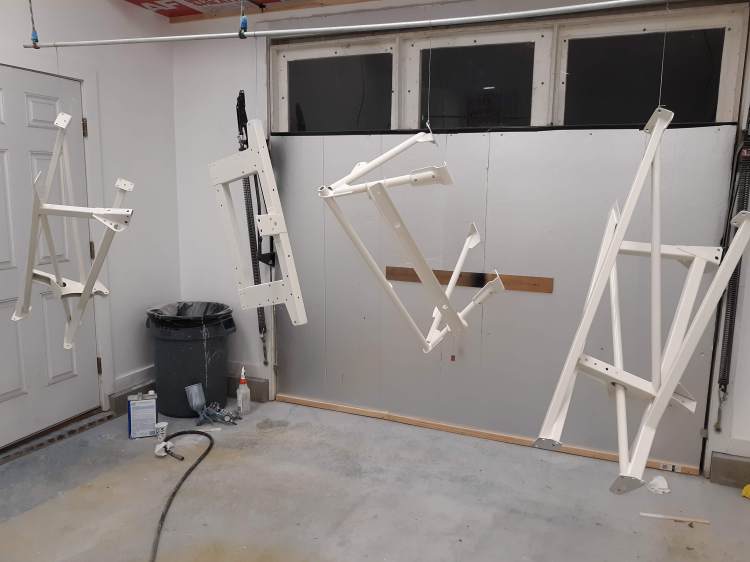 The bolting hardware required to fit the two engine frames, the picture frame, and the bonnet support frame is a little bit of a puzzle. Fortunately there is a very nice document available that lists the size and location of the various bolting. Link. Concours originality would require that all the bolting hardware be a specific type such as BEEs or GKN. For this build, I have defaulted to modern Grade 5 hardware obtained from http://www.mcmaster.com. They sell the bolts in clear zinc so they match all the parts in the engine compartment that I had plated in clear zinc. I used “co-loc” nuts, which have a nylon insert that resists loosening due to vibration. Almost all of the holes on the frames had to been cleaned out with a drill bit to remove enough paint to allow the bolts to be inserted. The fitment on the E Type Fabs frames was pretty good. I had to use a bar clamp at the front to squeeze the 2 sides together a bit to allow everything to line up. I fitted the frames before the engine was installed. In retrospect, I suspect that one could at least “stage” the engine in place on a dolly or such and avoid some minor drama as I encountered when I put the engine in place after the fact.

Firewall – While access remains good, I decided to complete as much work as possible on the firewall. As discussed in my November progress report, I pulled 90+ items from the engine compartment, bead blasted them, and sent them to Industrial Plating in Gastonia, NC for clear zinc plating. The JCNA originality guide for Etypes can be downloaded from the JCNA website and can be searched for the term “cadmium”. This will help you develop a list of which parts, mostly in the engine compartment, which were originally cadmium plated. Cadmium plating is still in used today but less so since cadmium has been identified as a carcinogen. A reasonable substitute is zinc plating with a clear chromate coating, typically referred to as clear zinc. Note that the chromate coating can be had in several colors. Many manufacturers using a yellow coating, which you will commonly see on modern cars. Regardless, getting steel parts plated with clear zinc is very cost effective. I got my entire batch done for $150.

They basically hang the large parts from hooks and put the small parts in baskets as they move through the process. Unlike a chrome plating specialist, which I will discuss later, they are not interested in making your part any better than what you send them. Fortunately I have the equipment to clean up the steel parts by blasting them with glass beads. None of the parts were significantly corroded so, by and large, the parts I got back looked very nice. Many parts, such as the blanking plates, are attached to the firewall. Other items attached to the firewall include the wiper motor, the washer motor/reservoir, the fuel filter, the brake booster/slave cylinder, the heater, the heater valve, and the bracket that holds the voltage regulator. I spent some time cleaning up the cast aluminum housings that hold the accelerator pedal, the brake pedal, and the clutch. BTW, the originality guide lists the accelerator pedal as cadmium and the brake and clutch pedals as black. Who knows exactly what black paint Jaguar used back in the day but most experts say it was a garden variety enamel. And runs were typical 🙂 I used Rustoleum Industrial High Gloss enamel in a spray can. I did install a new brake master cylinder that I obtained from SNG Barrett. Sticking brakes can be a problem with the Etype and one cause is corrosion between the MC body and the reaction valve, causing the actuating pin to stick. Upon inspection, mine didn’t look too healthy so I bought the new part to be safe. Of course, inside the firewall are the heater and vacuum pipes. These were replaced with stainless pipes during the original restoration and were in good shape. Fortunate, as they can be a bear to replace.

Chrome- I discussed chrome plating in my November article. Pauls Chrome has about an 8 week lead time. The parts I sent them before Christmas came back recently and look very good. I have subsequently reviewed my bumpers and lighting units. As is life with a restoration, these now look shabby with respect to the new items. Every item I looked at had some pitting such that they cannot be cleaned up with normal cleaners and polishes. So I bit the bullet and have just sent more pieces to Pauls. I will also be ordering some new reproduction parts from SNG Barrett. Quality chrome plating is not cheap, especially if the substrate metal has to be repaired due to corrosion. They can work miracles on pieces that are in poor condition but it takes time and thus gets expensive. It is in many cases more cost effective to buy a reproduction part, in which case the substrate metal is brand new and can be plated without minimal labor. Basically all of the exterior chrome parts are being re-chromed or replaced. Inside, so far, I have sent in the handbrake assembly and the chrome parts from the seats to Pauls. Many other small items in the cockpit, such as door handles, etc. were replaced with new parts during the original restoration.

Finally, I got the engine installed. With the car on a lift, all you have to do is lift the car up about 4 feet, roll the engine on a dolly under the car, and lower the car back down. It’s a pretty tight fit fore and aft so I removed the motor mounts from the side of the engine to allow it to go straight in. I of course had already cleaned the engine up and touched up the paint. Once I got the engine installed, I installed my new black porcelain exhaust manifolds that I purchased from SNG Barrett. They look fantastic. We’ll see how they hold up. Then I installed the stainless steel exhaust system, which I had substantially cleaned up. 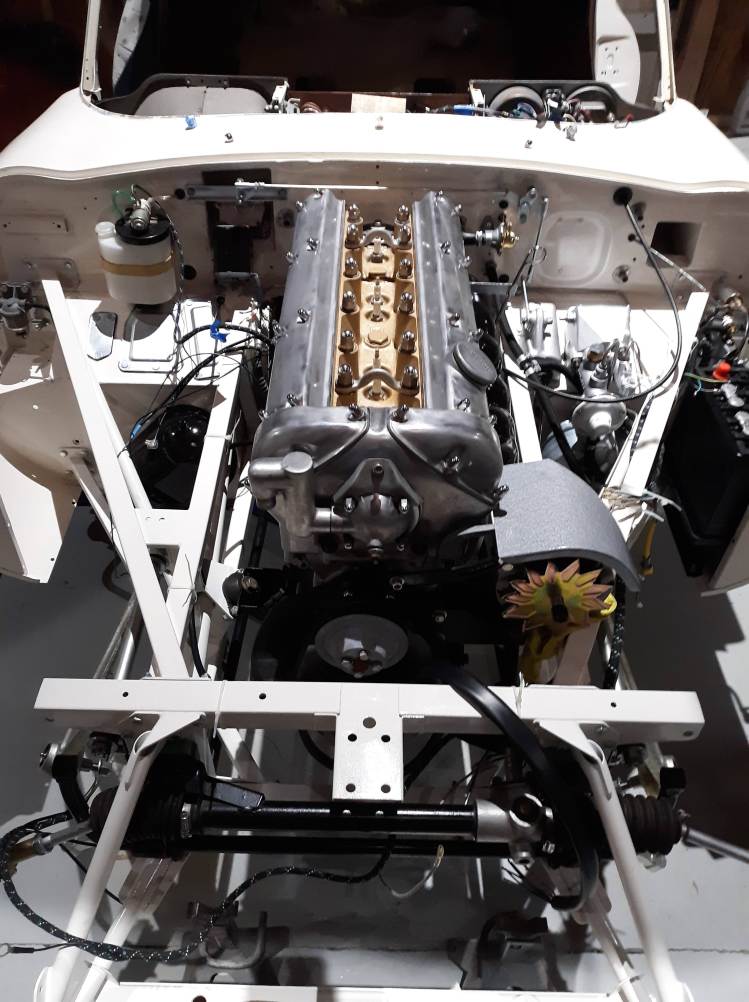 There is a lot to do. I’ll just keep on plugging away.