My last article regarding my 1967 Etype 2+2 coupe was entitled “It’s Done!“. It has been 5 years since I wrote that article. I have enjoyed the car in that time, it is a real beauty. That said, I am fortunate to have recently retired from my career in nuclear power and, as has been my plan, I am now able to devote the majority of my time to my car hobby. With that and the ticking of my biological clock, I have decided to take my 3 Etypes to a very nice Driver or Concours level and sell them to fund purchase of something new and different. First up in my plan is a “re-restoration” of my white 1967 Etype 2+2 coupe.

This car was manufactured in June of 1966 (per the Heritage Certificate), making it one of the first 2+2 cars to be built. According to Dr. Thomas Haddock’s Jaguar E-Type Restoration Guide, 2+2 production began in 1966 with serial number 1E75001. My car is serial number 1E76753. It’s first owner was a Mr. Fred Knoll of Nesconset, NY. As I originally acquired it, it had open headlights, toggle switches on the dash, triple SU carburetors, and eared knock-offs.

For purely aesthetic reasons, during my original restoration, I decided to convert the bonnet to closed headlights. My subsequent research indicates that this car should have been manufactured with closed headlights. For instance, the JCNA Judging Guide for Series 1 cars lists the change to closed headlights as occurring at 1E77010. As such, I feel it is accurate to describe this car as a Series 1 car. The reason for the switch on this car to open headlights will never be known but, in the day, plausible reasons could include a desire to update the appearance of the car by the owner or a decision based on the availability of repair parts after the car experienced some form of collision damage to the bonnet.

The Heritage Certificate states that the car was originally Silver Grey with a Black interior. As I discussed in one of my original restoration articles, I was and remain bored to death with Silver cars. And black interiors. So I went with a color combination of Old English White over a tan interior that I and my wife found pleasing. I plan to stick with that color combination.

The 2+2 body has traditionally been treated as the ugly duckling of the Etype family. It is roughly 6″ longer and 2″ taller at the roof. The practical manifestation of this change is that a taller gentleman can fit into the car and there is seating for 4. The rear seating area is best reserved for children, although an adult can squeeze in there in a pinch. The bonnet and engine compartment for the 2+2 are identical to a standard Etype coupe. As a consequence, the view through the windscreen that the driver is treated to is the same as with any other Etype, coupe or convertible.

That brings us up to speed with the general characteristics of this 2+2. As discussed in my original series of articles, when I found it, it was in rough condition but the price was right. I did a significant amount of panel replacement to obtain a rust free car. The engine was rebuilt by Dick Maury’s crew at Coventry West. The original transmission was replaced with a modern 5 speed Tremec transmissions as sourced from 5speeds.com in Florida. The tan interior was sourced from BAS. I personally performed the vast majority of the original restoration work.

My goal is to bring the car to a level that it will score well in the Driven Class of a JCNA Concours competition. Having just performed an evaluation of the car, reaching this goal will require some work. The results of my evaluation and my game plan for the next phase of its restoration will be the subject of my next article. 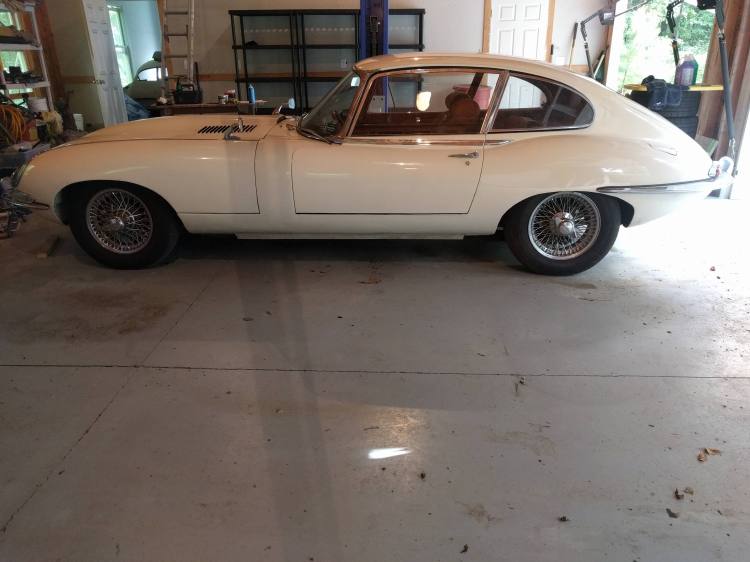