John Lochemes of Memphis TN strolled into his local Jaguar dealership, Bluff City Jaguar, in June and bought himself one of the new Jaguar F-Types.  John appreciates a powerful car so he bought the S model with the V8 supercharged engine.  This engine boasts a power rating of 495 hp and a zero to sixty time of 4.2 seconds.  That means you can get a speeding ticket in less time than it takes you to read this sentence.  So what does John do?  He drives his new car from Memphis to the Road Atlanta road course in Braselton, Georgia.  And proceeds to thrash the living daylights out of his new purchase!

I met John at Road Atlanta in late July, as I was also there to thrash my seriously out-gunned 132 hp Porsche 944 track car at a High Performance Driving Event (HPDE).  I couldn’t help but notice the black F-Type convertible parked near me in the paddock.  I went over to chat up John, telling him that I had recently taken a test drive in an F-Type but felt obligated to keep it near the posted speed limit, which was fun but kind of like going to a rock concert where all the amps are limited to 3 on the volume control.  So I was excited to see this F-Type in the paddock but expecting to hear the all too familiar refrain “Oh, I don’t want to track it”.  But John did not disappoint me.  He was indeed there to track the F-Type.  As he told me, where else could you safely and legally put such a car through its paces.

But wait, there’s more.  John had his two sons Andrew and Adam along with him.  Andrew is in college, Adam is in high school.  “Do they get to drive the F-Type?” I asked. “Of course” John said.  “I don’t play golf or tennis so this is my hobby that I like to share with my boys.  So of course they get to drive the F-Type.”  Wow!  I remember my dad was pretty proud of his Pontiac Tempest station wagon with an “overhead cam!”  There was even a brief fling on his part with a hopped up Chevy Vega when I was in college.  But nothing like this.

A High Performance Driving Event is a safe, legal way for enthusiasts to get their high performance cars out for some track time.  Wheel to wheel racing is not allowed but you will be driving as fast as you dare to go.  Passing occurs with a “point by” from the leading car, acknowledging to the following car that it is OK to pass.  This particular event was put on by Chin Motorsports, who has the largest calendar of track events on the east coast.  They put on a first class event.  Supplemental track insurance can be purchased for the weekend.  John told me he had purchased track insurance for his car for the weekend.  The participating cars are split into 3 run groups.  There is an expert/instructor group, an advanced group, and a novice group.  Each group gets on track for 6 sessions each day, Saturday and Sunday.  Beginners are assigned an instructor to show them the ropes and keep them out of trouble.  Andrew, Adam, and I were assigned to the novice group.  John runs in the intermediate group.  I hasten to point out that I am not a Novice, having over 40 track days under my belt.  But low power cars like mine are assigned to the novice group to reduce the major speed differentials that will occur if I run with high power Jaguars, Corvettes, Porsches, and Ferraris, driven by experienced drivers.

John was gracious enough to offer me a “ride-a-long” in his F-Type in one of his sessions.  Wow, that was quite an experience!  Of course, the acceleration that comes from a 495 hp engine immediately puts your stomach in a place it doesn’t want to be.  Not to worry, when John hit the first heavy braking zone, everything went back to its original position.  The F-Type brakes are outstanding and really whoa the car down in a hurry.  The car comes equipped with Pirelli P-Zero low profile tires, which offer up tremendous grip in the corners.  John never had any trouble getting through various corners at a rapid pace, although he was able to get the rear end out upon corner exit when he got on the gas a little too quickly.  And the exhaust note – it was intoxicating!   It was great fun and over way too quickly.  Oh, and the rush of doing 145 on the back straight with the convertible top down was something else.

So I think Jaguar has hit a home run with this performance oriented car.  And it looks really great whether it’s at speed or just standing still.  I’m really happy that I got a chance to experience a ride at speed in this great new model from Jaguar! 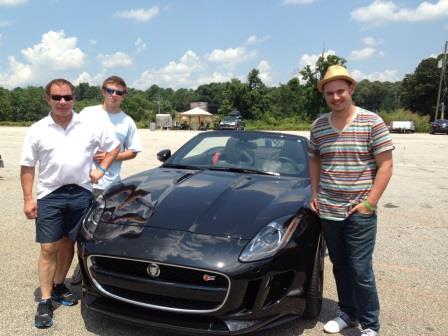 HPDE Primer- High Performance Driving Event.  An HPDE is a way to get your street car on the track for some safe, legal, high speed driving.  Events occur almost every weekend at road course tracks throughout the US.  Events are sponsored by the major marque clubs such as BMW and Porsche, as well as independent clubs and for-profit organizations.  Chin Motorsports, Tar Heel Sports Car Club, PCA, BMWCCA, Rezoom, and TrackDaze are groups that I have run with that I would recommend checking out.  You can run your stock street car with minimal preparation.  A pre-event inspection will be required.  These events are hard on tires and brake pads but otherwise, your car should complete the event no worse for the wear.  Actually, you get a free “Italian tuneup” with each event!  Track insurance is available from selected insurance carriers.  Novices will be assigned an instructor.  There is no charge for the adrenaline rush!