I think my next article will be a summary of weight reducing actions that occurred to the Porsche Track Car but first I think discussion of the wiring is warranted.

Many of the items jettisoned to reduce the weight of car were fed by the electrical system of the car.  There is a truly massive harness that goes from the engine compartment to the passenger compartment.  As I stripped out the car, I literally cut this harness out with a metal grinding disk.  I vowed to go back with a minimalist custom wiring system.

The following systems are still required for the track car:

A couple of comments-

So with this in mind, I started with a control panel that I bought from Summit.  I dedicated its available toggle switches to Master on/off, Fuel Pump, Radiator Fan, Lights, Defrost Fan.  Plus it has a push to start switch.

The center of my custom dash held the switch panel.   Behind it I mounted relays.  I found out later that the load from all of the above through the fuse for the master on/off switch would blow a 40 amp fuse.  Not wanting to go any bigger on the fuse, I had to install additional relays for the radiator fan and the headlights in the engine compartment and feed them directly from the alternator.

One area that gave me quite a bit of puzzlement was where to mount the emergency battery disconnect switch.  The sanctioning bodies like this to be external to the car so the corner workers can get to it.  I liked the idea of having it within my reach.  I decided to put it on the extreme left hand side of my custom dash, right next to the pull for my fire suppression system.  I can reach it from there and a corner worker can reach in the open window to get to it also.  I may ultimately have to mount a wire pull to the outside of the car to be legal. 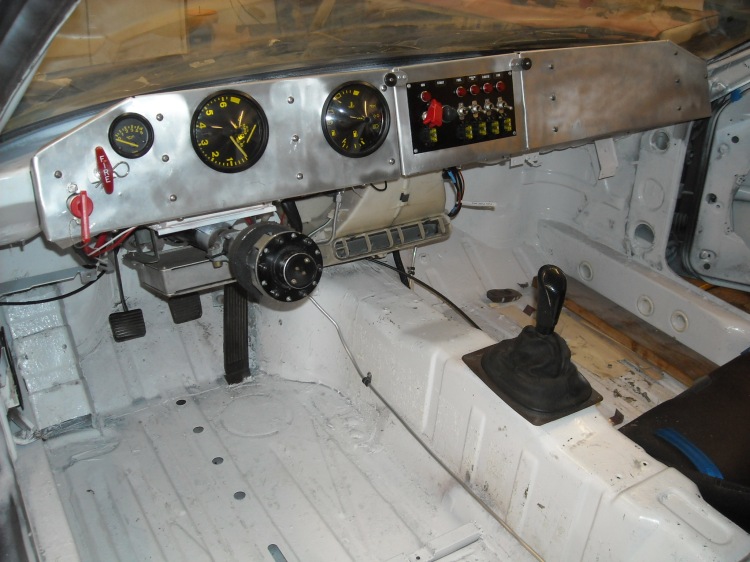 I buy all my wiring connectors, mainly 1/4″ flat spade connectors, from NAPA.  Their quality seems to be a pretty good compromise between the really cheap junk and high end stuff.  I solder all my connections and the encase them in shrink wrap.  The shrink wrap is to keep the natural vibration of the cable from stressing the stranded wire just beyond the solder joint.  It also provides a much neater looking installation.  I bought an assortment of loop type wire ties (that attach with sheet metal screws) which I used copiously as well as standard wire ties.

I used the stock tach, oil pressure, water temp, and fuel gauges.  They are basically wired stock.  I re-used the stock stalk for the wiper but I isolated the single circuit that caused the wipers to run at their fast speed and only wired that one circuit.  I cut the stalk off short to avoid hitting it during the heat of the action.

I must be old fashioned.  I hate plastic corrugated wire loom.  I prefer to wrap my harnesses in black cloth friction tape.  I did break down and buy a “kevlar look” woven wire loom from Summit to run my harness from the dashboard back to the rear hatch area, for the fuel pump, fuel gauge, brake lights, etc.

Wiring the car took multiple weekends of work.  It is not a trivial effort.  But it is very important to reduce the wiring to a minimum for weight saving and to do it correctly for reliability.