Last month’s article addressed rebuilding the Jaguar XK engine. Since there is a lot to discuss regarding engine rebuilds we are continuing with a third article. As we discussed last month, my engine is a 4.2 litre XK engine for my 1967 E-Type 2+2. Dis-assembly of the engine revealed damage to the combustion chambers, rings, pistons, and cylinder walls. I decided to send the engine to Dick Maury at Coventry West for a professional rebuild, not to mention repair of the damaged parts so that I could continue with a “numbers matching” engine combination. When we left off in last month’s article, Dick had finished installation of the crankshaft into the block. 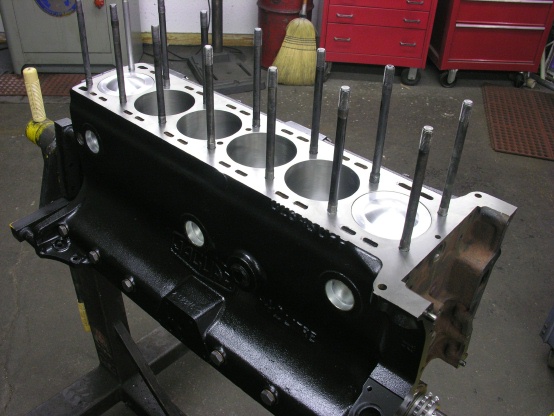 the side clearance of the rings in the machined grooves on the pistons. A bad fit might mean starting over with new pistons or rings but better now than having a smoky engine down the road!

Next the piston rods can be fit to the pistons. For my engine, Dick used reconditioned rods from XJ6 engines, which are of a slightly stronger design. The rods engage the pistons via the wrist pin. The clearances and fit of the wrist pin to both the rod and the piston are verified to be within spec. Once all six piston and rod assemblies are complete, it’s time to install them in the cylinder 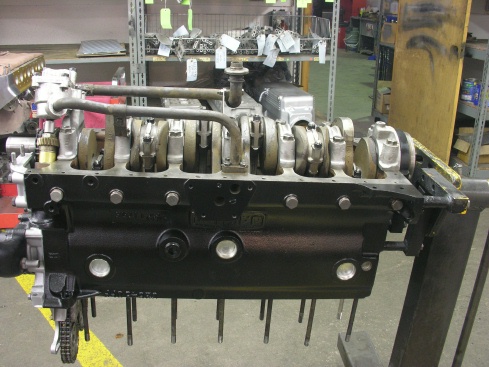 bores. The bores are slathered with lubricant and the rings are compressed tightly around the pistons using a ring compressor. The ring compressor will compress the rings to a diameter slightly smaller than the cylinder bore, allowing them to be tapped gently down into the bore from the top using a mallet. Once the far end of the rod gets near the crankshaft, they open end of the rod is slipped over its corresponding crankshaft journal. The bearing shells and the journal are also slathered with assembly lubricant. Finally, the rod bearing cap is installed on the opposite side of the journal and its retaining nuts

started. Dick uses new rod studs and nuts, which also has the benefit of eliminating the older design castellated nut that used cotter pins, which could come loose and create havoc in the engine. The nuts are torqued to spec. Repeat for the other five cylinders and that part is done!

All of this time, the block has been mounted on an engine stand, which holds it up at a convenient work height and allows it to be rotated as required. Spinning the block upright, new studs can be installed into the block, which will shortly be used to attach the head. With 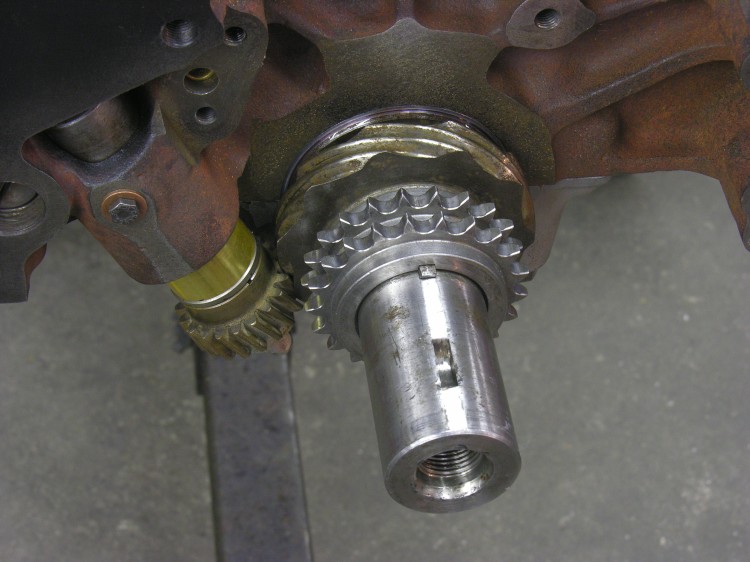 Closeup of cam drive off of nose of the crankshaft

the block inverted, the oil pump and its associated pick-up hardware can be installed. Dick installs a new oil pump and makes sure all the connections are tight. Also, the gears that drive the distributor are put into place.

The overhead cams on the XK engine are driven off the crankshaft by the lower and upper timing chain assembly. Typically new timing chains are used along with the existing gears and mounting brackets. After being mocked up on the bench, the entire assembly can be hung from its sprocket on the front of the crankshaft. Not shown in these

pictures are new timing chain guides and tensioners. At this point, the freshly cleaned oil pan can be installed. Finally, the front timing cover, the front crankshaft oil seal, water pump, harmonic balancer, and pulley sheave can be re-installed. Of course, new gaskets are used at all of the critical sealing surfaces, along with the correct gasket sealant products.

At this point, the engine is ready for the re-furbished head. Since I am about out of space for this month and I don’t want to short change the discussion of the head, I’ll finish up for now with a shot of the head cleaned up and ready to be installed. Next month we’ll discuss what measures were taken to get the head ready for fast motoring.