Last month’s article addressed the installation of the radiator and related components in the engine compartment. This month we’ll look at electrical wiring.

Last month I led off my mentioning that the cooling system on the E-Type had a negative reputation. Well, I am sure that the reputation of the Lucas electrical system on the E-Type and other British cars is no better. There is a reason that Lord Lucas is known as the Prince of Darkness! With this thought in mind, I put my engineer’s knowledge to work to try and come up with some improvements.

The first and foremost problem with most 12 volt automotive electrical systems was and still is connections. Connections can and will degrade over time. Degradation generally is represented as an increase in resistance. As the resistance goes up, heat is generated. Higher temperature generally increases the resistance further and eventually a burned out connection results. So my first job was to concentrate on making really good connections.

Original specification wiring harnesses can be purchase for the E-Type. For a true concourse restoration I am afraid the original style harness is a must, as it has a distinctive woven cloth covering. British Wiring (www.britishwiring.com) and others will sell you an authentic harness. Hold on to your wallet! A complete set of harnesses runs well over $2000. The OEM harness uses “bullet” connectors. In principle, these connectors are sound in that they have plenty of surface area for electrical contact. But I think that the abrupt transition from the solid connector to the stranded copper wire leads to failures due to flexing and fatigue. I decided to circumvent this problem by going with a more modern but time consuming solution. That would be soldered spade connectors with heat shrink tubing. More on that later.

I also decided that I wanted to go with new wire throughout. The stranded copper of the original wire is very robust but the same cannot be said for the insulation, which degrades over time. Of course new harnesses from folks like British Wiring are constructed from new wire. I decided to purchase a good quality stranded wire in spools from NAPA for my project. Once I committed to new wiring and a different connector style I in essence was committing myself to building new wiring harnesses from scratch. This had another benefit in that it liberated me from replicating certain design features of the original harness that I didn’t like. One 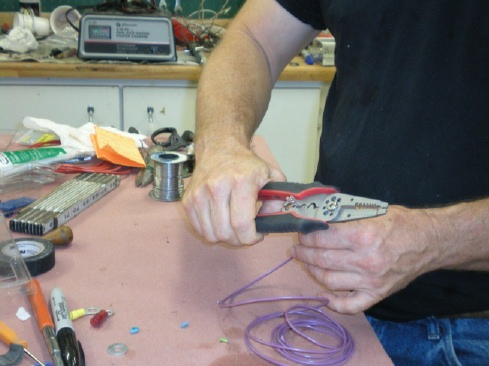 problem with wiring harnesses from any mass produced car from the 60’s (or now for that matter) is that the bean counters drove the wire sizes down to the bare minimums. Add any modern features at all, like stronger headlights, a sound system, and a power source for you cell phone and voila, the OEM system can be overloaded. With my new harness I increased almost all of the wire sizes by one step and in the case of the primary power leads from the upgraded alternator I planned to use, I went up several sizes. Ditto for the headlight circuit. Another important improvement for reliabilities sake is that I am running dedicated ground wires as part of my new

Step 2: Solder the wire to the female blade terminal. Blade terminal is crimped for a mechanical connection before soldering.

harness. This avoids problems with poor ground connections when using the chassis as the ground circuit.

Which leads us to another problem with 60’s vintage wiring systems. See that amp meter sitting in the dash. In order for it to give you an accurate reading of what is going on, all of the current (amps) from the alternator must be routed through it. From there, the current is dispersed to various systems and components. This leads to long wiring runs, commensurate voltage drop-offs, and poor component performance, in particular the head lights. Shortly after the 60’s, most manufacturers, including Jaguar, went to a voltage gauge,

The final upgrade is the use of relays. Relays are very common in modern cars and even the E-Type had a few, like for the horn. A relay is basically a heavy duty on/off switch for power, that is activated by a smaller remote switch, like the ones on your dashboard. This way, smaller wires (and smaller currents) pass on the

message that you want your lights, horn, A/C, etc. turned on and the relay does the heavy lifting of switching on the heavy current required for the device, back at the load center. Relays ensure that virtually full system voltage and current reach the component needing it. This is especially important to allow headlights to shine at their brightest.

So first I developed my load center. In the accompanying photo, you can see a clear plastic cover over 4 standard Bosch relays. Two are for the high and low beam headlights, one is for the radiator fan, and one is for the horns. Behind the relay box 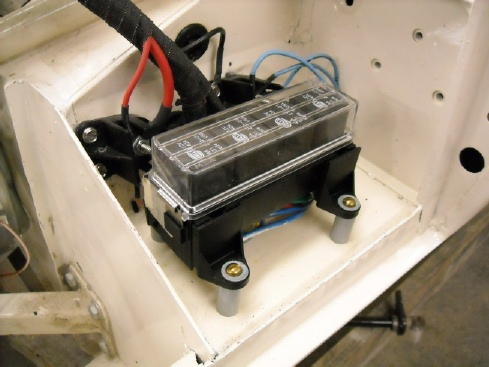 4 Relays with enclosure used to control fans, lights, horn, In background you can see 2 common wiring terminals for 12 volt in/out.

are two heavy duty wiring terminals. The largest red wire is a 10 gage lead from the alternator. From there, the full power of the alternator is distributed out to various subsystems. Note that at this point, the wiring hasn’t entered into a traditional fuse box. For system safety, fusible links are used at this point. Fusible links are a one time system that will melt locally and prevent further overloads (and possible fires) inside the passenger compartment. The light blue wires in the photo are fusible links. They are cheap insurance.

Anyone familiar with an E-Type will recognize that my load center has replaced a small rats nest of components that normally reside in this location. The other feature of my system that makes this simplification possible is the use of a modern internally regulated alternator. In other words, voltage regulation is internal to the alternator and allows the elimination of the externally mounted OEM voltage regulator. Not concourse but a vast improvement.

Now back to the wiring connections. Most of the components on the E-Type use a ¼” male spade (or blade) connector. The wiring is connected using a female spade connector. These are common on many cars and available in quantity from NAPA. The following sequence of 4 photos shows the basic process. Strip the insulation off the wire about ¼”, insert the bare wire into the connector, crimp, solder, and fit a heat shrinkable tube over the connection. The key improvements are that the soldered connection is very good electrically and the heat shrinkable tubing provides a springy interface between the flexible wire and the rigid solder connection.

Interior view of one of the toggle switches

Another issue that I tried to address was the reliability of the dashboard switches. Replacement units were questionable and expensive. I finally worked up the courage to carefully open each switch and clean out the internals. Use an electrical contact cleaner (such as CRC brand) and Q-tips.

So can I say that all this is worthwhile? Only time and hopefully improved reliability will tell. I do know that it took me about 6 weekends to assemble and install the harness. It turned out, as usual, to be a greater undertaking than I had anticipated. About par for the course! And finally, I must give credit to the folks at Mad Electrical (www.madelectrical.com) for many of the ideas that I utilized. Their publications are most informative.