Last month’s article addressed the installation of the rear hatch and its glass. Selection and ordering of upholstery was also discussed. This month we are going to look at refurbishment of the windshield wiper mechanism and installation of stainless steel heater pipes.

The E-Type is interesting in that it has 3 windshield wiper blades. I assume this is a packaging issue based on the fact that the windshield is relatively low in profile. I know that many people remark on this fact when they are looking at an E-Type for the first time, so it must be an unusual feature in any car.

There are several problems that can be associated with the windshield wiper system. Sluggish operation is one. The failure to properly “park” when being shut off is another. One thing is for sure, the wiper system is a real son of a gun to access and work on! There is a standard joke that can be applied to any car that goes along the lines of “They hung the (fill in the blank) from a wire at the assembly line and built the car around it”. For the E-Type I would say that the wiper mechanism must have been the piece that was hung from that infamous wire!

In my case, the dashboard was totally stripped, i.e. all I had was the sheet metal framework. Even so, the access is poor to say the least. The dash sheetmetal has 2 internal cavities that are welded up at the factory. One funnels air from the heater element mounted on the firewall to the outlet points. Above this cavity is a space where the heater pipes, wiper mechanism, and the windshield washer tubing goes. Access at the midpoint of the dash is through an opening about 4″ square. This opening allows access to the spindle for the center wiper, as well as the park mechanism and the attachment to the shaft from the motor. To the left and the right are smaller openings which access the spindles for the left and right hand wiper. These openings are sized such that only someone with small hands can gain access.

But it gets worse. Before you even think of installing the wiper mechanism, you had better install your heater and vacuum pipes, which must be accomplished via these same access ports. That big 4.2 litre in-line 6 cylinder engine really fills up the length of the engine compartment. I assume for this reason, Jaguar decided to route 3 small pipes that carry engine coolant for the heater inside the same cavity as used for the wiper. Plus there is one pipe that carries vacuum for the brake system. After 40 years of service, these pipes can become very thin due to corrosion. Many folks have been introduced to the existence of these pipes only after smelling anti-freeze in their cockpit and discovering wet carpets. The job to re-place them on a fully assembled car is not for the faint of heart. One positive consequence of this is that replacement parts are available from the parts suppliers fabricated in stainless steel, with the thinking being that this is a job you only want to have to do (or pay for) once! I purchased a set of stainless steel pipes from Terrys (www.terrysjag.com). You should trial fit the pipes to establish the order of installation. Obviously you want to put in the most difficult one first and work your way out. The pipes are held in place with pop rivets installed from outside the firewall. Small “D” washer plates are supplied that must be match drilled to the existing holes. You will need to find the smallest pop rivet gun available, as a larger one will not fit. Having an assistant to hold pressure against the pipe on the inside while you rivet from the outside is a big help, although I managed to use various pieces of wood to jam them into place temporarily during this phase. I don’t want to paint too dark of a picture but this job took me many hours to accomplish. If you are unfortunate enough to need to make this repair on an operable car, you will absolutely want to remove the dash top and probably should consider removing the entire speedo/tach panel and the glove box panel. You will most certainly need to remove the wiper mechanism in order to provide access to the pipes.

Once I had the heater pipes installed my attention turned to the wiper mechanism. As with most parts on the car, 40 years of age caused them to be tatty looking. I bead blasted and repainted the parts. The spindles that extend on the outside of the car are chrome plated. If the chrome is in poor condition, new spindles can be purchased from the usual parts suppliers. 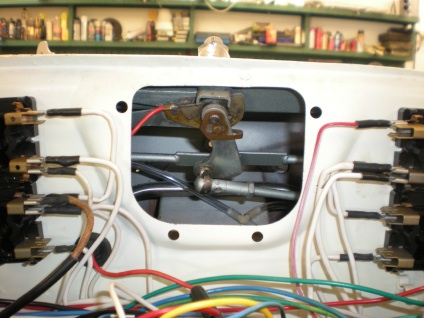 Installation of the internal wiper mechanism is tricky. The various parts must be inserted through the 3 small openings. I will post more detailed instructions on my website (www.newhillgarage.com). But in general I would equate it to building a ship in a bottle! Of special interest is the park mechanism. If you lower the central instrument panel on your E-Type you will see a square opening between the fuse blocks. Inside this opening is the park mechanism. You may have noticed that when you switch your wipers off with the dash switch they actually go into reverse for one cycle and then park. The precise park position is controlled by a small electrical contact in the park mechanism. There is a cable leading forward from the park mechanism that extends through the firewall, where there is a metal knob in the engine compartment. This knob can be adjusted to fine tune the park position of the wipers. 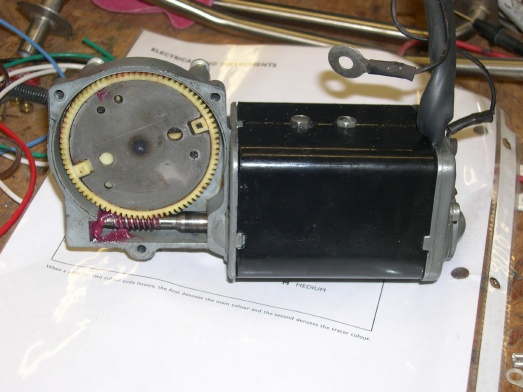 I next turned my attention to the wiper motor. The motor can be substantially dis-assembled for lubrication, maintenance, and painting. There is a gear mechanism on the end of the motor that will most likely contain petrified 40 year old lubricant. This should be cleaned out and restored with new grease. The aluminum end caps can be cleaned up. The metal case looks much better after receiving a new coat of black enamel paint. The commutator for the brushes can be cleaned up with emery cloth. Re-assembly is fairly straight forward. As usual, taking lots of pictures is always wise during dis-assembly.

One significant problem I ran into was the fact that the small ID tags I had placed on the 6 wire harness connection were hopelessly faded. And the colors on the wires were faded too! After obtaining some help from Dick Vandermeyden out in California, I was able to reconstruct the wiring plan. This info is also placed on my website here. Just be sure, I temporarily wired the motor and its switch up on my workbench using a 12 volt battery charger. After a few false starts, I was met with a motor that rotated fast, slow, and parked. It was a great feeling!

Installation of the motor into the firewall opening is tricky. The drive shaft must be mounted on the motor before it is inserted and there is only one position in which it will go in. Be sure to replace the rubber bushings for the mounting plate that attaches to the firewall. One last test with the motor installed rewarded me with a quiet but confident wiping motion from the assemblage of parts!