Next on my agenda, after working on the sport seats, was replacement of the bio-hazard carpet in the 944. Also on my agenda was the implementation of some “RS” style door panels. The period correct carpet for an 80’s Porsche would be “Sliverknit” carpet. One definition of Sliverknit that I have seen is that the tufts of the carpet are split so that they absorb dye more readily. It is also a very lightweight carpet, simpatico with my efforts to reduce the weight of the car. I am not a big fan of “triple black cars” and wanted a carpet that tied together the blue exterior with the black sports seats. After consultation with my wife, we selected a silver-blue carpet, which I purchased from GAHH. The carpet is very light weight, with a minimal backing. I ordered 5 yards of carpet, which was just barely enough to do the job. 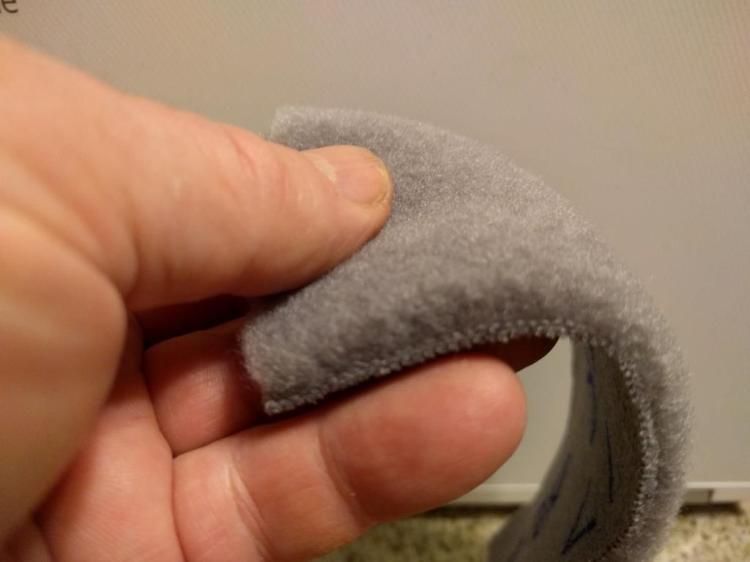 The floorboards of the car had several layers of factory installed material, which I gather mainly provided sound deadening, as well as cushioning for the carpet. Some of this material was in very poor condition. I also know from my 944 track car that the sound deadening material is heavy. I decided to remove as much as I could. The top lay came out without much of a struggle. The bottom layer was very attached to the steel floors. I tried using an alchohol/dry ice mixture to “shock” the bond between the material and floor boards, as I have seen this on Youtube videos and it seemed remarkably effective. Unfortunately, this did not work very well for me. I wound up using a putty knife and a heat gun to get the material loose. I was able to remove 18 pounds of sound deadening. 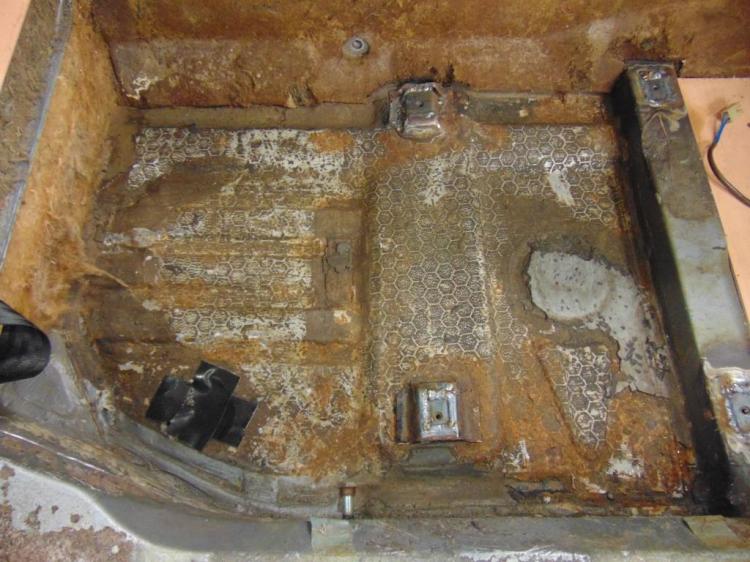 Floor with most of the sound deadening material removed. Not discussed in this article but all 8 seat attachment bolting locations were compromised and were cut out and new heavy duty weldable nuts were welded in.

Although removing sound deadening is good for weight reduction, there is a price to pay in both noise and heat insulation. On my previous track car build, I had found that there was a tremendous amount of heat generated at the passenger footwell, which makes sense in light of the exhaust headers on the other side of that bulkhead. My solution for this is to install Koolmat. Koolmat is a proprietary product that comes out of NASCAR country. It is very effective for heat insulation and is also thin, so it doesn’t compromise subsequent carpet installation.  Here is a link to an article I did regarding installing Koolmat in my track car. I performed a similar installation on my street/track car. 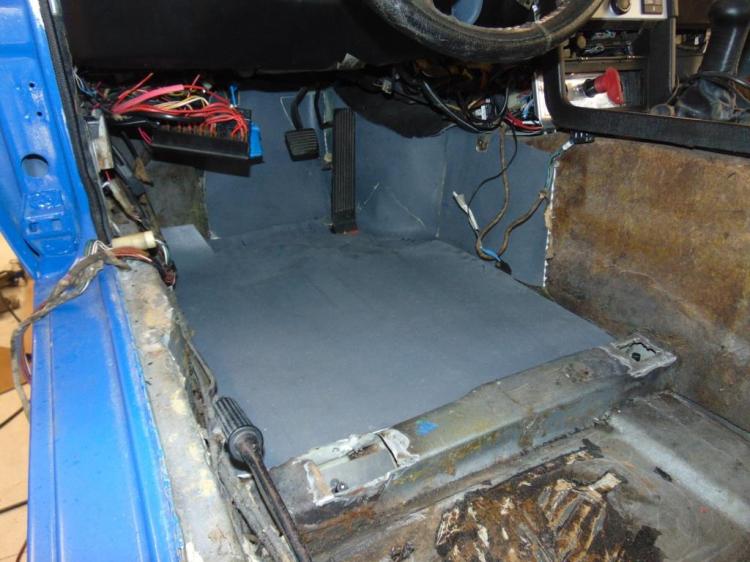 Koolmat installation on drivers side footwell

Koolmat installation on passenger side footwell.

I was to find that the light weight nature of the carpet would cause it to “telegraph” any imperfection in the underlying surface. I decided to use thin plywood to prepare the floor surfaces for the carpet. I bought a thin (~1/4″) plywood from Home Depot that is quite smooth on both sides. It has a trade name like “Plysand” but you will recognize it because it has no blemishes on either side, unlike more utilitarian plywood. And it is quite light in its own right. I cut panels to fit the floor boards and the rear cargo area. I also made pieces to cover the rear seat area, as this area is not very usable with the roll bar installed. The Sliverknit lay beautifully on top of the plywood. I used 3M spray adhesive to adhere the carpet to the plywood.

Thin plywood under the carpet.

I had saved the old carpet pieces and inspected them. It was obvious that Porsche was able to form or mold some of the pieces. The main piece for the cockpit went from door to door, passing over the torque tube tunnel. I decided the break the job down into smaller more manageable pieces. The torque tube tunnel was one piece. The front floor boards were one piece. The rear floor boards were one piece. And the rear cargo area was one piece. Any cut edge that was visible was “bound” with a sewn strip of similar colored vinyl. There are a number of smaller pieces on the vertical surfaces that surround the cockpit. One area where I used vinyl instead of carpet is at the 3 sides of the rear compartment, as shown in the photo below. The top edge is secured with velcro so that the area behind can be accessed for maintenance. I also replaced the vinyl in the overhead area surrounding the sunroof. Finally, I fashioned a cover for the spare tire, as shown in the photo below. With a track car, you will be required to remove the spare tire and jack at every event so I wanted to make this as painless as possible.

I also took this opportunity to replace the 30 year old seat belts. I personally would not like to count on seat belt webbing of this age to do its job. I bought some aftermarket belts that were reasonably close to the originals. 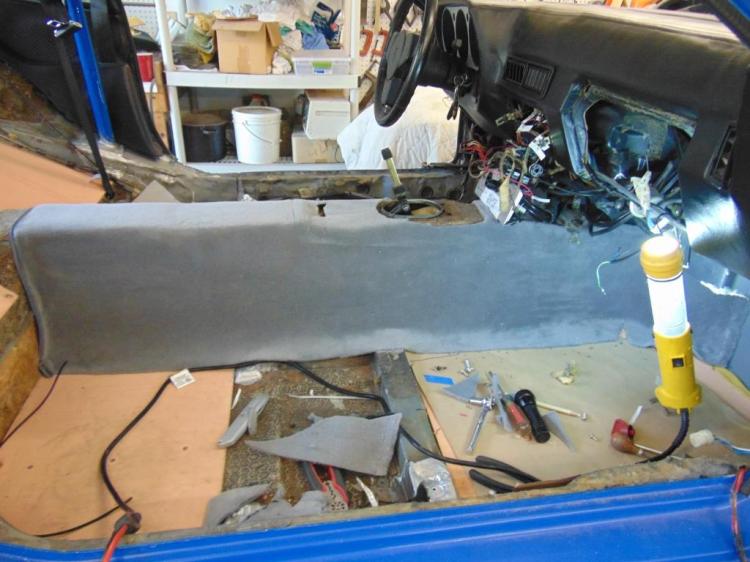 One piece over the center tunnel. 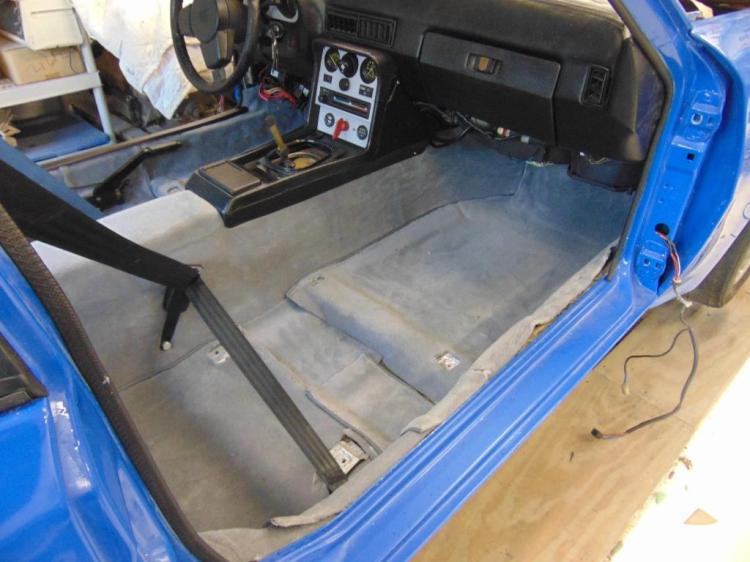 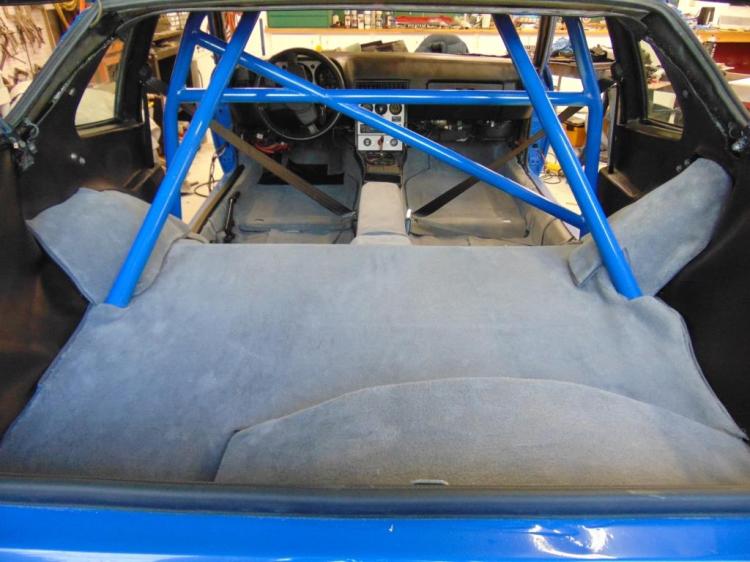 Spare tire cover. Black vinyl is partly visible as installed on the 3 sides of the cargo area.

I am very pleased with how the carpet turned out. I think it ties in the black interior elements very well with the blue exterior.

Next I turned to the “door cards”. The OEM door cards are basically backed with cardboard, which after 30 years are in pretty bad shape. And, although I am not aware that Porsche every made a “R” or “RS” version of the 944, they certainly did so in the 911. Such minimalist cars have stripped down door cards. Google images for 911 RS door cards and you will see many examples. One iconic feature is the cloth loop that you pull to release the door latch.  I decided to have a plain door card with cloth loop pulls, a leather strap to pull the door closed with, and a small “map pocket” for items such as phones, sun glasses, etc. I flirted with the idea of manual handles to roll up the windows. After reviewing the technical difficulty of somehow attaching handles to the electric window mechanism and noting that the weight savings would be negligible, I decided to stick with the electric windows. 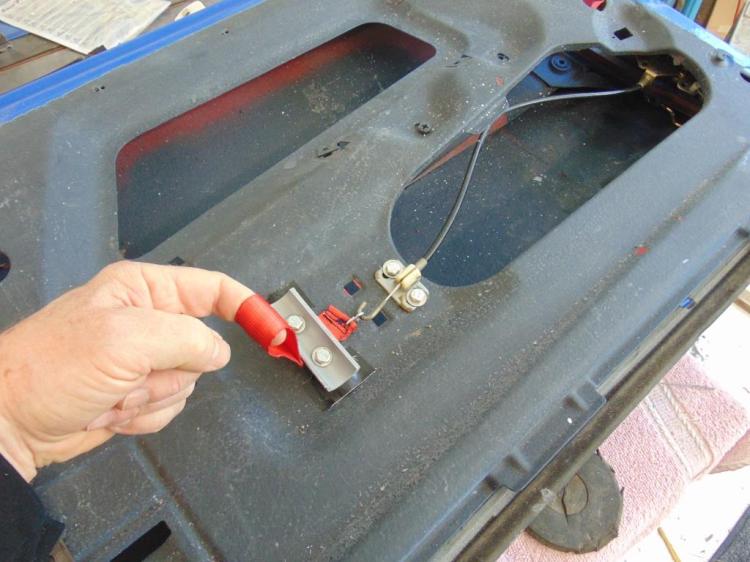 Door pull strap is routed around a piece of electrical conduit, split lengthwise and bolted to the same location that the OEM latch uses.

After reviewing the situation, I came up for the solution for the door pulls as shown in the picture above. I have to admit that these are mainly “bling” as the standard interior door latches are very light weight and with their mechanical advantage, are actually easier to open the door with than the pulls that I designed. That said, the cloth pulls look very cool and make a statement as to the sporting nature of the car. I had to re-use the upper portion of the stock door card, as it is a complex shape that I could not easily reproduce. I simply cut the top part off and re-used it. For the lower section, I cut aluminum sheet to the desired shape and covered it with vinyl. The pull straps were formed from a tri-fold strip of leather, glued and sewn. The map pockets actually turned out to be tricky, as they have an elastic top to hold them closed. I think they turned out pretty well!

Aluminum sheet is used for the lower door card. The top part of the OEM door card was cut off with a razor knife and re-used.  Leather door strap is shown, before being painted black.

Completed door card on the passenger side.

Map pocket. The top edge is gathered up with elastic.

All in all, I think the door cards give a very sleek look to the interior and support the track oriented ethos of the car very well.

I will mention here that much effort went into making the electric window mechanisms work well. I exposed the various gears, cleaned off the 30 year old grease, and added new grease. I made sure all the various tracks that guide the windows were in good shape. And I cleaned the door glass probably like it has not been cleaned in many years. My reward is that the electric windows now work very well.

So that’s pretty much it for the interior. I have to source a few small items that are in bad shape or missing but the big stuff is done. Of course, now that I done the exterior and the interior, the engine compartment looks pretty rough in comparison. I think that will have to be the area that I concentrate on next.