I’m not exactly sure when it started but for a while now I’ve been entranced with the look of the Porsche 928.  Oh, I guess it started a few years back when I picked up a 944 for track usage and naturally got to looking at the 944’s big brother.  It certainly wasn’t because I got excited about them when they were new.  In the 80’s I was recently married, we had 3 kids in a period of 18 months (a son followed by twin daughters), and I was busy with my engineering career.  I’m sure that in eastern Washington where I lived I never saw a 928 in the flesh.  Whatever, the itch has been there for a while.  I see them for sale quite often on Craigslist.  Even though I am a sucker for a car rescue more than most, these Craigslist cars clearly have needs.  It is apropos of several cars to say “There is nothing more expensive than a cheap _____” but filling the blank in with Ferrari, E-Type, or 928 is certainly a good start on a list of deserving candidates.  Being a PCA member, I starting looking at ads in The Mart.  I can now offer a second aphorism “There is nothing more expensive than a late model 928 GTS!”  Wow, some folks are very proud of these final model year cars.  I suppose the thinking is that they are highly collectable but I was not in the mood to drop top dollar into a low mileage time capsule that I was afraid to drive.

As I continued looking, I really fell in love with the early models.  No wings, no spoilers, just pure out-of-this world rocket ship shape.  And that wild Op Art seat fabric?  I loved it!  But again, I wanted my car to be a driver.  I’ve owned all manner of full injected European cars starting with the CIS mechanical injection cars and progressing to the Bosch K and L electronic injection cars.  Give me the electronic injection any day.  So I moved my timeframe forward a few years away from the early cars.

The high prices of the final model GTS models drop a lot if you are willing to go a few years earlier into the 928 S4 variant.  These are very nice cars, with everything being continuously improved by Porsche over the 10 years of production.  But that wing!  Cutting edge at the time but every damn car today down to the lowly Toyota Camry seems to be sporting a wing these days.  I’m sick of wings.

So without thinking about it too much, I was boxing myself in.  I continued to look at the entire model range but was becoming biased toward the cars older than the S4.  And I wanted to buy the best car I could afford, in order to avoid immediate maintenance issues.  This equation gets a lot easier to balance when you look at the cars from the 80’s.

And finally, I wanted a 5 speed car.  Although it will not see anything like heavy track usage, I do want to track my car.  And I love to row through the gears.

For the sake of historical perspective, as I am writing this in fall of 2013, I’m going to throw in some figures from the Hagerty Price Guide, a handy little valuation tool I like to use.  I’m going to quote average values for a few model years.  I’ll use Condition 3, which is indicative of a nice driver.

So I was kind of bumping along, checking out the ads here and there.  A home remodeling project was underway which can be a major distraction and I was enjoying HPDE weekends with my very capable and well sorted 944.  When lightning struck!

Actually, I didn’t initially know I had been struck by lightning.  It was just another ad on Rennlist for a 1986 model car.  The pictures were a little sparse.  Once of the car sitting in some sort of shop.  A few interior and engine bay shots.  But I was attracted to the long list of maintenance items that the seller had performed during his ownership of the car.  And the mileage was mid-range.  In the 70’s.  Not too little to say it would be a mess from being driven too little.  And not so much that things were getting worn out.  The color was white.  Many folks go for exotic hues.  Not me or my wife Kelli.  White Cayman.  White Jetta.  Old English White E-Type.  Orange 944 (Hey, it’s a track car).  The car came with original full leather upholstery in a tan color.  Gee, guess what the upholstery color is in the Cayman and E-Type?  So the pictures showed a color combo that I was very comfortable with, was easy to keep clean, and reflects the Carolina sun.  So I read the ad and said, Hmm, may be a possibility.  But it was in Ohio, which gave me pause to not rush right out and buy the thing. 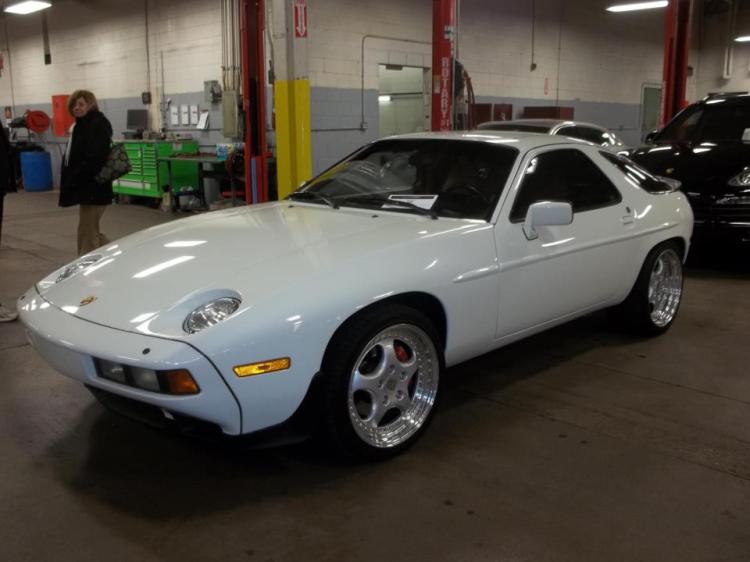 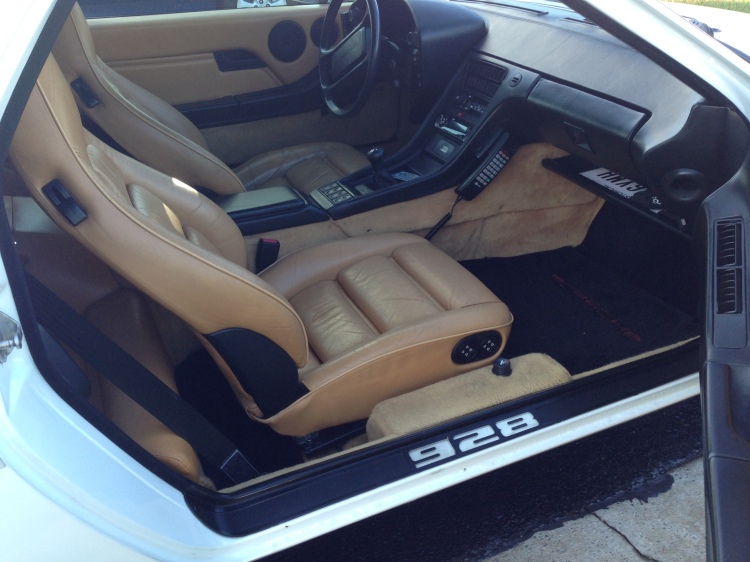 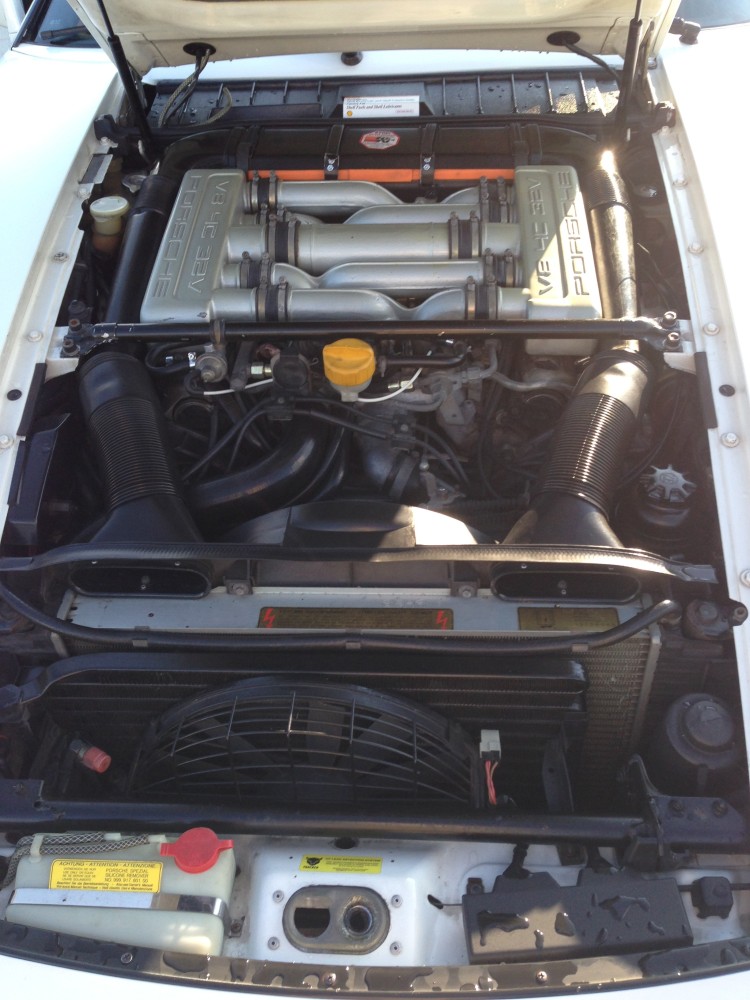 I think literally that weekend, I went to VIR for a DE.  I have a friend who tracks his 928 and he was there.  I had already done ride-alongs with him and was more than happy with the performance of his car.  What I needed to circle back around and check was seating ergonomics, which are becoming to be a big factor for me in my old age.  I sat in his car for about 10 minutes.  Tried all the seat adjustments.  Wow, the dash pod moves up and down with the steering wheel.  How cool!  No longer would the gauges be hidden by the top of the steering wheel when I leaned the seat back for lumbar relief.  Let’s just say I found the seating to be better than most.  Worlds better than a Ferrari, for instance.  (Think tight Italian shoes, if you will).

But things were busy and a few more weeks went by.  The seller kept bumping his ad every few days (a smart move on his part).  No takers but lots of positive testimonials from his friends about the car.  I’m here to tell you that when a ½ dozen random people chime in on a Rennlist ad with positive words, it makes a big difference when the car is 4 states away.  Good move friends!

So after about 3 weeks something clicked and I decided to call the seller.  Joel (jhrob007).  Great guy!  He immediately sent me a much more extensive set of photos.  And we talked about this and that.  Car guy stuff.  He left me feeling very comfortable that he was a straight shooter.  I mulled it over the weekend while I was at anther DE.  The following Monday I called him again.  More discussion.  Could I get a PPI?  Could we get a wheel vibration issue looked at?  Would he accept a deposit to hold the car for 2 weeks? Yes. Yes. Yes.

We were on our way!