The Introduction of the Jaguar E-Type in 1961 – Remembered, as told by David Littlefield, Wayne Phears, and Eddie Cole

The Introduction of the Jaguar E-Type in 1961 – Remembered

50 years ago, on March 15th, 1961 the Jaguar E-Type has its European launch in Geneva, Switzerland.  Two weeks later on April 1st, 1961, Jaguar unveiled the E-Type for the first time in the United States at New York’s Fifth International Automobile Show, attracting record-breaking crowds.  The E-Types on exhibit were the hit of the show.  It was reported that over 300,000 people viewed the stunning new Jaguars over the nine-day run of the show.

The centerpiece of the New York Show exhibit was an opalescent bronze E-Type coupe, spinning slowly on a raised turntable above the crowd.  Adding further glamour was actress and Playboy centerfold Marilyn Hanold, dressed in a shimmering gown, long white gloves, and a floor-length silk scarf. 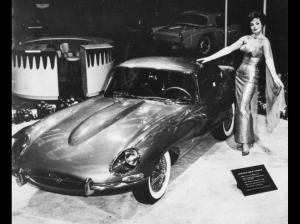 Recently, I attended the Hilton Head Concours d’Elegance, where a special class of E-Types were gathered for display. The organizers of the Hilton Head Concours had agreed to present a separate class for these very special cars in recognition of the upcoming 50th anniversary of the E-Type’s debut in 1961.  Among the 11 cars presented were 3 cars manufactured 50 years ago, in 1961.  Following are interviews that I conducted with the owners of these cars.  Each had fascinating stories to tell.

David Littlefield, a new CJC member living in Clayton, NC, gave the following accounting of how he obtained his 1961 E-Type OTS and it’s relationship to the New York auto show.

Tell me a few things about the car  –  The car has about 73k miles.   I’m the 2nd owner.   I purchased it at the 2003 Barrett Jackson auction in Scottsdale from the widow of the original owner, Bob Bourke.   Bob was a designer for Studebaker.   He designed the Starliner Coupe, which is a well known milestone car that came out in the 50’s.   Bob owned the car until he died.   Bob’s son was at the auction, shepherding the car through for his mother.   He told me about the car’s history and learning to driving in it as a kid.    The son told me that his father went to the NY auto show, saw the E-Type when it was introduced to the U.S., and absolutely fell in love with it, appreciating it as an automotive designer.   A few weeks later he went to the dealer and ordered one.   I’ve actually got the order form.   He wanted one in peach, which was his first color choice.  His 2nd and 3rd choices were black and black, which is the color Jaguar shipped him, not having any cars in peach!   Were you in a bidding war with anyone?   We started off in the 20’s and went up by a $1000 increments.  Then $500 increments.   I went up another $500 and the other bidders quit so I got the car.   The only thing I‘ve done to the car is clean up the engine bay.   One of the other neat things about the car is that it came with all the original documentation.   Owners manual, the service manual, the big poster for maintenance, the original key fob that came from the dealer in NY who delivered the car.   It’s got the original sticker that shows that it came with chrome wire wheels, white sidewalls, and an AM radio.   Interesting to me is that the radio cost $167 as an option in 1961.   That seems outrageous for a simple AM radio.   It also has the original tool kit with all the original tools.   At first I thought that the tire gauge was missing, but as I was cleaning up the car for the show I found it in a little pocket behind the seat, where the little key for the outside latches are supposed to be stored.   As told by David Littlefield, Clayton, NC 1961 Black OTS

David Littlefield with his 1962 OTS

Wayne Phears of Atlanta, GA brought a very early car, his car being the 10th one produced for the North American market.  As you will see, the facts behind how it survived to be viewed today are quite remarkable.

The story about how you found the car is pretty cool.  Tell me about it  –  It appears the car was in Birmingham, Alabama by the mid-60’s, with some evidence it was there in 1961.  Somewhere in the mid to late 60’s the fellow who owned it took the Jag engine out, set it aside and put a six cylinder Ford engine in it.  But, the good news is, he didn’t cut anything; if he had cut the subframe or cut the firewall it would have been fairly disastrous.  While the car passed through a number of hands the Jag engine just sat in a corner somewhere.  Ultimately, for a lack of a better term, a “picker” saw the car sitting in a front yard in Bessemer, Alabama, and called a friend in California who was into Jags.  His friend was in the parts business so when the picker read him the VIN number he knew it was the 10th LHD E-Type roadster made.  He told me later that he knew that someday he would put a Jag 3.8 engine in it, thus having a non numbers matching but very early car.  So a couple of years went by during which the California purchaser routinely called on ads for engines and transmissions.  One day he called on an ad about a 3.8 liter Jag in the 205 (Alabama) area code.  Dana Moore, the owner of the engine, was a Mopar guy but he had bought the Jag engine years before because he thought it was so cool looking.  You see one, they are beautiful engines!  The caller asked Mr. Moore to give him the engine number because with the engine number you can tell what model it came out of.  Without the number, all you know is that it’s a 3.8 engine, it could be out of an E-Type, an XK-150, a Mark IX, or a Mark II.  So the guy comes back with the engine number and the engine number is R1014, which means it’s the 14th E-Type engine made.  Of course the engine was in Alabama so it had to be the original engine because it seemed impossible for it to be chassis #10 and engine #14 and not be “the” engine.  So by a million to one shot they got the engine united with the car.  We checked with Karen Miller in New Jersey, at the Jaguar archives, and she confirmed the correct engine number from the certificate of authenticity and she also said that this and 7 other cars were on the first transporter to the US, so I know all the cars that were sent from the factory on May 16th, 1961.  It was the first shipment of cars to the US and, of the first ten E-Types made, I only know that numbers 3, 6, 9, and 10 still exist.  That is the story of my E-Type! 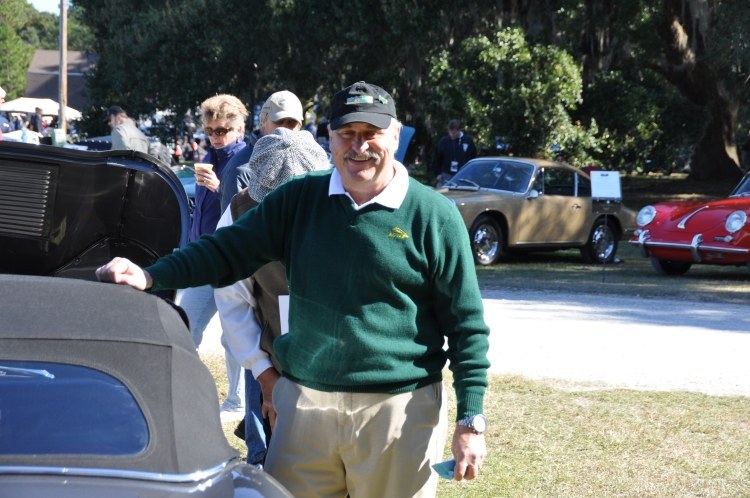 And finally, there’s this story told by Eddie Cole of Carrollton, GA about his early love affair with the E-Type.

Tell me a few things about the car–  I have owned 875206 since August 1995 and it is a work in progress and that is why this car is titled as My Kid in College; kids in college call often and say send money!   It went through an early restoration because it wasn‘t a safe driver.  The tub was rusted so it had a lot of work to get it safe.  I never really started to restore it to a concours car , but a driver, and each thing has just kind of added on to the next project and I’m getting it now to where it’s a safe driver and enjoyable to show. So have you done the work?  No, I haven’t done the work.  I have a bum finger from my teenage days that shows I shouldn’t be doing the work!  It’s been difficult for me finding the people that I wanted to do the work and I think I‘ve been real lucky in selecting folks because it’s taken a lot of work to get the car to where it is now.  Tell me what identifies this as an early car?  There are 3 characteristics you hear most often as you talk to people about the early cars:  You’ve got the flat floors, the outside bonnet latches, and the welded louvers.  Those are the characteristics of an early car.  Mine was made July 12th.1961.  Do I see that you have a little latch key?  You see the key right here?  It stays in my pocket.  They call it a key to open the outside bonnet latches.  The correct place for this key to mount in the car is with 2 clips to the side of the transmission tunnel, on the passenger’s side.  But you don’t want to lose your key so it stays in my pocket.   So can you remember when you first saw an E-Type?  Well what an interesting question. Absolutely, I could almost remember the day.  I’m from a relatively small town where I live now, Carrollton Georgia.  I went to college in Charleston South Carolina and they had a Jaguar dealership.  I didn’t know much about Jaguars but one day some of us students were going downtown on the bus and we drove by the Jaguar dealership and I saw this car that I had never seen anything like it. So, of course, the next weekend we took off to go down to the dealership and look at the car. So it was 1962, in the spring, that I first saw a Jaguar XKE.  I thought it the most beautiful car that I had ever seen. I still feel that way today.  And quite by chance I bought an early 1961.  And I think it is just a very beautiful car.  I like driving it.  I do trailer my car.  It’s an open trailer and I get lots of smiles and thumbs up as I tow or drive the car. 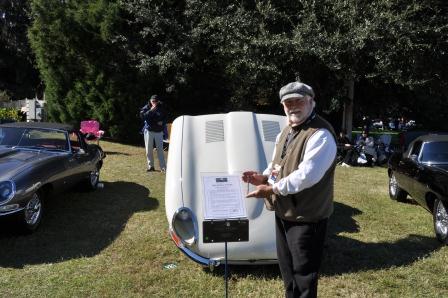